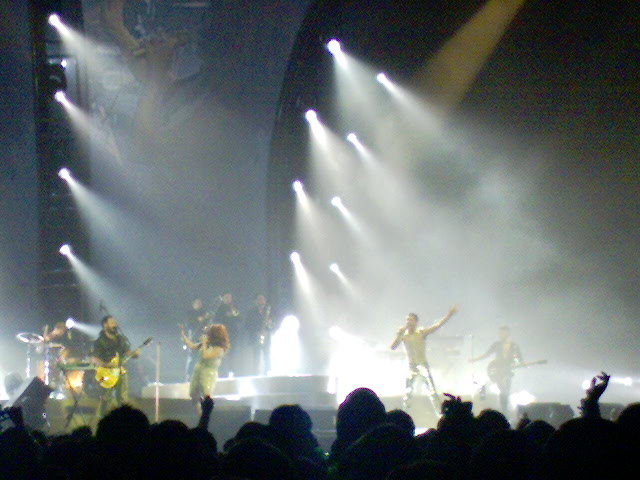 Hey you! Yes you! You're a cunt! Stand at the gig with your phone in the air all during The Big Hit, filming it all. Then, for the next song, instead of watching and enjoying that, stare at your teeny tiny cock-extension-phone watching the video footage you just shot, with the sound blaring out, so I can't hear what the band are ACTUALLY playing. Then constantly turn around, turn your light on, and take photos of yourself with the band in the background, every 10 fucking seconds, just to remind yourself you're actually fucking there! Yet, you're not enjoying it - too busy documenting everything, recording everything, ensuring that you can enjoy it when you get home... but you missed it all when it was happening around you. You missed it all, you fucking cockend. Fuck off. 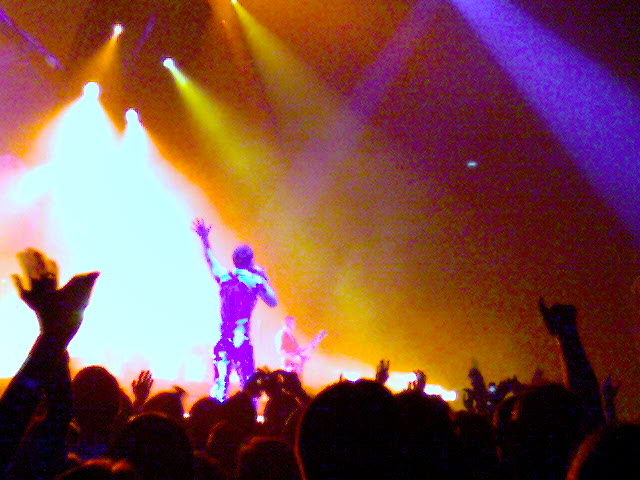 Being the world's premier family friendly gay disco heroes, The Scissor Sisters appear to have conquered the world over the past four years. Second album "Ta-Dah!" has managed to avoid the cliché of diminishing returns by subtly expanding upon the original template (literate, silly stadium disco rock), by being More Of The Same, but slightly better.

A catch-all for the everyman, the Scissor Sisters managed to straddle almost every demographic in the world. By being slightly gay - but not gay enough to alienate anyone - they have found a middle path also populated by Elton John, Pet Shop Boys, and so forth whereby they're taken to the heart of suburban England, loved by houswifes, old ladies, young hip kids, and also seen as trailblazers of the gay music movement. I haven't seen such openly out loving since I spent time on the scene in London years ago. And it's lovely to see.

At the stroke of 9pm, the lights go out, the Dj moves away from a set of high-powered disco anthems, and everything kicks off : the cavernous o2 Arena becomes a giant dancefloor as the wide demographic dances and grooves. There's as much entertainment to be had watching how thousands of people self-unconsciously dance as there is on the stage itself. The cross generational appeal is gargantuan, and for a second, I imagine this must be what it's like to be in U2 or Bon Jovi or Queen, where everyone in the world likes your band. 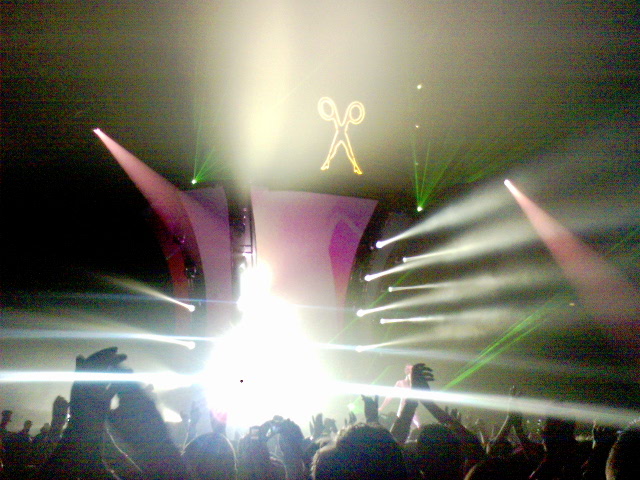 In the meantime, the stage - resembling a Spielbergian Mothership from Planet Disco - does nothing so much as utterly fulfil the mission of pop. The outside world is left outside, and nothing exists but these 90 minutes of abandon. The greatest hits set encompasses all the hits - the colossal "Comfortably Numb", "Take Your Mama Out", "Mary", "Laura", the frug-pop of Abba's spiritual heir "I Don't Feel like Dancing" (which about as odd as Def Leppard doing a song called 'Let's Not Get Rocked'), and all the rest means that you are never more than a song away from a stonkin' great big slice of pop heaven. Jake Shears pounces and preens, having stepped into the shoes of arena entertainment. There's some wonderfully self-depreciating moves that both play to, and parody, the very artifice of rock. Ana Matronic meanwhile is kind of like your sexy disco sister : gleefully letting go of such preconceptions of body image and sizism in favour of a bit of glam dancing. In the meantime, the show itself is quite literally otherworldly, the stage a veritable UFO that often resembles nothing so much as the end of Close Encounters Of The Third Kind, whilst everyone revels in the sensory overload of the audio-visual spectacle. The last time I saw anything as ostentatious as this was U2's PopMart.

Despite being the end of the year long tour, the Scissor Sisters aren't anything but one vast, wonderful celebration of life and it's perverse foibles. Tonight, we're all Scissor Sisters. All part of the same tribe, where sexuality, colour, gender, wealth are all utterly irrelevant in the face of our core humanity.