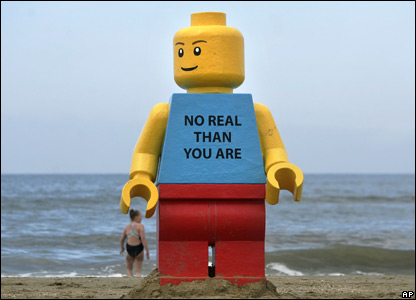 Tommorow is a big day. Maybe. Not sure. Maybe I get to be the bride, and not the bridesmaid. Who knows?

One thing that bothers me is corporate invasion of private life. For some reason, I feel spied on by corporations. That all I am to this massive profit machine is an opportunity. That I'm not permitted to have opinions, to voice my feelings. Yet this massive corporation is allowed to issue forth press releases and distort facts to suit its own ends : the end being profit.

When we're at work we are corporate slaves. We are spied upon. Phone calls are monitored. Internet usage scrutinised. Every word we say and everything we do is analysed.

The worst thing, and something that has increasingly come to my attention, is the fact that when you leave work... work never leaves you. Whatever you do outside of work - even if it doesn't affect your performance - apparently that matters as well. But surely it doesn't matter whatever anyone does or says outside work as long as it never enters the workplace. I would never be so daft as to take tons of drugs, or do a Queen Of The Sky, or use inappropriate language at work, or act unprofessionally.

But as soon as the clock is off, the uniform is removed, and I am myself again. Yet some people feel ... hounded by their employers sometimes. What business is it of theirs what anyone do or say outside of work as long as it does not affect the work performance?

But somehow employers feel that they have the right to spy on you : to actively seek out everything you say and do, scrutinise it, and look for ways which these can be used against you. I've known employees be called up to account for innocuous things they've said many many years ago which are, as far as I know, completely and utterly irrelevant. This hardly makes the employee feel valued : it feels like living in a McCarthian witch-hunt where people are going to be penalised for things they never did or said.

Speechless is an interesting link. This feels like living in Communist East Germany, being persecuted for something they didn't even know they were supposed have done.

Get out of our private lives. Corporations pay us to do the work : they don't pay us for the right to invade and intrude upon our lives. So, corporations, get your hands out of our lives. If anyone says anything you don't agree with : tough. You're a great big corporation that has a multimillion pound turnover. If someone says something you don't like, maybe it's not them whose bringing your firm into disrepute - maybe you did it to yourself with your own actions. Employees are not unthinking automatons. People are entitled to opinions based upon the way they are treated by the people they interact with, be those people their employers or service providers. If big business is allowed to have an opinion then so is the customer : and without a customer, a business has nothing. Everything a business does influences the overall opinion of that business. And if the business doesn't like the opinions people have of it, perhaps the business should change how it acts. We are all judged by our actions.