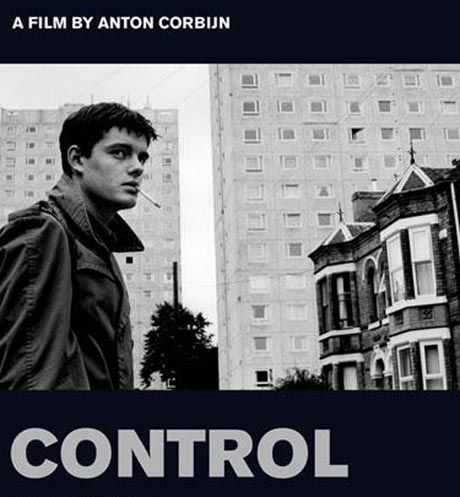 The best music film of all time.

If Oliver Stone had made this, it would be in garish supersaturated slo-mo, and Curtis would've been shadowed on stage by the spirit of Jim Morrision. Bullshit. Here, Corbjin plays the action slow and steady, in neatly framed, historically accurate reproductions of the time. Since Corbjin was, to some extent, actually there and took the definitive photographs of Joy Division, the man knows what he is going on about. Far more than any similar feature directed by anyone whose trying to recreate a past they never lived.

Control captures the last few years of the short life of Joy Division vocalist Ian Curtis. Under an assured eye, and a clearly defined visual style honed by three decades working in photographic and video art, Corbjin finally brings all his talent to bear in a masterpiece of film-making that ticks slowly down to an emotional timebomb of an ending that could very well shred your emotions. The combining factors that lead to Curtis early demise are succinctly established in a slow escalation to a climax with the intensity of an earthquake.

Corbjin was the man who made U2 cool. Gave Depeche Mode their visual identity. The man who gave Henry Rollins the superman suit. Corbjin knows how to create iconography. Here, the lead character is the grey, dying suburban Britain of the late 70's and early 80's. The infancy of Thatchers Britain. The oppressive nature of suburbs becomes the unseen architect of the tragedy. In one respect, "Control" is a horror film about the battle of a man torn between his desires and his commitments. Torn between his wife, his child, his mortgage, his job, and the lure of his dream as a musician, a genius, and the glamourous foreign girlfriend. Add in the extra burden of then-incurable epilepsy causing rapidly declining health, and the stage is set for a mundane drama of immense consequences.

Musically and visually, the film captures my memories of growing up at the time with a eerie accuracy. Faithful to the source material and the participants, Corbjin never aims for an unrealistic gloss over the unfolding events. It feels like a documentary. To a harcore fan of the band, it has to look and feel right. And my god, it does. Characters offset the gravitas of the events with the kind of typical depreciating humour that is both very human, and very funny. As Rob Gretton, Tony Kebbell steals the show with some fantastic, endlessly quotable lines. Joe Anderson as Peter Hook provides a gruff foil to Curtis aura of troubled soul.

Best performance of the film meanwhile, belongs to Samantha Morton as Curtis' wife Debbie : a loyal, solid hard working Northern Girl of pure heart who stoically and bravely tries to keep everything running whilst loves tears it apart. The final scene - one that held the audience silent and on the brink of tears - sees Morton owning the viewers hearts, and we can't even see her. It's a spellbinding performance.

"Control" is - without a doubt - the best, most honest, unflinching rock biopic ever made. Absolutely essential viewing and the best British film in decades. You absolutely have to see this.
- posted by Mark @ 11:34 pm


Comments:
Wow, sounds awesome. Have duly added it to my DVD rental queue. No cinemas for us any more, the ones in London are shit and expensive.

Have LCD projector at home though :-)

Better than "Head" by the Monkees?

I don't believe you (but will see it this weekend, just to check it out).