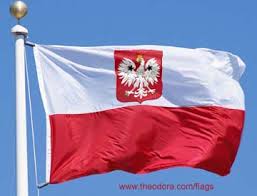 It's in vogue at the moment to bash the Polish. Generally, I take a very dim view of such behaviour, as everyone is an immigant from somewhere : hell, America is made of nothing but immigrants, after all. That said, I'm finding that in my dealings with them there is a definite sense of cultural seperation by the POlish from the rest of the UK. Recently, I've seen a lot of signs in Polish. And forgive me, but I end up asking myself What Fucking Country am I in?

I dislike being in my own country, speaking the second most popular language in the world, and not being able to understand the signs and the language. It's not as if I am abroad : if I was I'd make a concerted effort to speak the language even if I were nothing but a tourist.

I'm often ashamed of Brits abroad. Well, on the cheap package holidays I used to take anyway : surrounded by idiots who think that because they're abroad they have carte blanche to be a dick. It means some people think, perhaps understandably, that all Brits are dicks. Sometimes I open my mouth, and I see the preconception from people that I'm like the rest. I holiday a little wiser these days.

Being able to order dinner in Spanish whilst everyone else around me was talking pidgin Engerlish, and pointing at things, before holding their fingers up to indicate how many of them they wanted "ONE UNO BIG MAC!". Sheesh.

I personally think that immigrants anywhere should make an effort to integrate with the culture around them. I feel alienated by foreign language signs. There's a massive one outside the Natwest at Notting Hill, all in Polski. Now, as you may know, I'm a tolerant, liberal guy. To me, the very concept of nations and language are alien. We should all speak one language, all belong to one country. Borders are bullshit.

But when I see a massive Polski sign outside a bank.. I end up thinking.. you know what - Fuck Off.

Learn the language. Make an effort. Integrate. I'd like my interaction with my neighbours to be a bit more than being commanded in halting English by a cheap-as-chips Polish Brickie to "MOVE CAR NOW." And if they made the effort to learn the language at anything other than a childs level I - and I think many other people - would feel the same. It's not an unreasonable request. If I went to live abroad to speak the language I'd make an effort to integrate. I don't like feeling like an alien in my own bloody town.


Comments:
It's not xenophobia, it's just what happens when cultures are slammed into each other overnight and expected to work instantly.

It's going to take a long time to integrate but tempers in this country are very short.

that's no real answer or solution is it? email imitating life.

my car's a lot cleaner these days though, to be fair.

Mark, I am going to have to disagree with you. I think that it's great, but consider I'm American, and live in Chicago, which has more Poles than any city in Poland, with the exception of Warsaw. These businesses that cater to immigrants are helping them assimilate economically, and by the second generation, I'm sure they will be proper, Guardian reading, British citizens. These businesses are in existence to serve customers, and any way that they can make it easier for their customers, the better. I would rather support a business that has multilingual signs, it shows me that they are smart business people. I've grown up with signs in Polish, Spanish, and now Russian, Chinese, etc. The more the merrier I say.

Lets get the whole world speaking the SAME language..

Lets get the whole world speaking the SAME language..

Good luck with that.

hell, America is made of nothing but immigrants, after all.

My wife and her Cherokee ancestors would beg to differ.

As for multi-lingual signage, having lived in Dallas, Texas for the past 18 years, I've grown used to seeing signs in both English and Spanish. I have no problem with it. I do agree that immigrants should make an effort to learn the prevailing language, and having signage in both Spanish and English helps in that effort. It also helps the English-only speakers (like me) to learn some Spanish.

I have mixed views on this. As part of my job, I'm involved in producing publications, and we get them translated into other languages (or Braille, large print, whatever) on request. Lately, I've been told that I need to have everything produced in Polish as a matter of course. This is very expensive, time consuming, and also means the branding is lost because having them done in an artworked format would be a whole different nightmare.

Now, I agree that people should be able to access information, but I also wonder if this encourages segregation? Here - and I can only speak for my own town - we have whole areas which are Polish areas with Polish shops, beauty salons etc, where no-one speaks English. This is not integration, it's taking a chunk of another country and sticking it here. No?