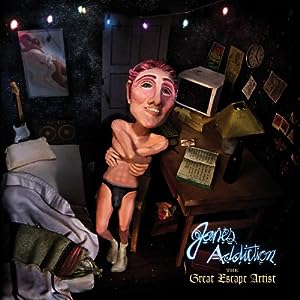 What are Jane's Addiction these days? An industry? A brand? A band? More than anything, perhaps they are an idea : “The Great Escape Artist” is only their fouth studio album in twenty five years ; though the debut “xxx” counts to me, and the band have hardly been shy at activity over the years, with two rarities compilations and a large number of sometimes brilliant, sometimes boring solo albums. Three years after reforming, and two after Eric Avery jumped ship, the band have completed a new studio record with, respectively, TV-On-The-Radio's Dave Sitek, GNR's Duff McKagan, and longstanding second bassist Chris Chaney on various songs.

How does it compare? It's an album, not a selection of 79p downloads for your ears : 10 short songs and 40 minutes. Not here are the glorious, vast epics, but instead a boatload of compact, but equally visionary rock songs helmed from the Jane's mould – shifting tempos and keys, guitars that sound like the mouth of God coughing off immense riffs, and a sold, rolling bass. In fact, I'm not sure that Jane's have ever sounded so good on record : the tones Navarro bleeds from this are probably made from the dying breaths of giant carniovres. When the songs hit a certain pitch, end of the first verse, then the song shifts gears, moves to a hypnotic mantra, drums pounds like some kind of tribal death chant, and no matter how the song is played, Stephen Perkins cannot play the same from bar to bar – the drums hold the enormous groove, whilst the vocals soar ; if nothing else Perry Farrell does enormous, aspirational, classic idealist rock lyrics better than anyone. “Curiousity Kills”is the kind of song that I never released I needed until I heard it, and now I cannot live without it.

In some ways, its a smoother, softer record than the gonzo bonkers rock squall of the late 80's high watermarks that made this bands name : but again, when you get to something like “Irresistable Force”, it's more the kind of lifechanging token you hold through a world ; “We became a big business – god isn't real” ; and then Perry, and a million coiled orchestras inform us of “The irresistable force, the immovable object.” and what happens when these events collide. In the ears of Coldplay, this song would sound like a sorry apology for existing. Here, Jane's go for the frank, and confident, defiance.

Either you like Jane's Addiction. Or you don't. There is no feeling in the world like being in the same room as them, when thousands of voices reach into their hearts, and thousands of arms to the air, screaming 'all of us with wings!'. Much of the material here is an evolution, the middle point between Jane's as was, and the more cerbral, but equally vital solo material from Farrell such as the out-of-step “Song Yet To Be Sung”, and the later, much under-appreciated “Satellite Party” : as the record comes to its conclusion, some of the material may flag slightly, (“Splash A Little Water On It” reminds me of the rubbish “Dogs Rule The Night” from the second Porno For Pyros album), whereas “Broken People” is relatively mellow, but also, openly fragile and human.

Bonus points go for the deluxe edition, which contains a full length live performance by the band taken from this years pre-album tour, mixing material new and old into a cohesive whole. What more can you ask for? A new record, and a live album, all in one – a result, by any standard.
- posted by Mark @ 10:26 pm