FIELDS OF THE NEPHILIM - "Ceromonies" 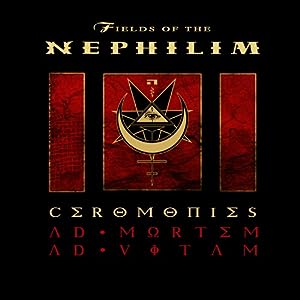 Four years after the event, and the Fields Of The Nephilim return with a immaculately prepared and constructed live set : after the now 20 year old "Earth Inferno" album and "Visionary Heads" film, the band, whomever they are, and whatever they do, are long overdue a presentation fitting of their current incarnation. With three albums since the last live record, there's a lot of songs to hear. In short, two CD's (and 2 hours) of music, and a hour long DVD, taken from two shows in London in July 2008, and "Ceromonies", The Fields Of The Nephilim present a new and fitting live experience. There's little repetition from the previous live set, with only "Psychonaut", "Moonchild" and "Preacher Man", and 17 songs not previously on any live record. Visually, the DVD may only be an hour - but what an hour. The use of imagery, shots, angles, and staging is not that of a regular band, but something far more than that , evoking the kind of shamanistic, transcendary ethos that underpinned the bands work, where the guitars are some kind of portal to a different universe. This band, bearing only the singer from previous incarnations of the name, is undoubtedly an effective, ruthless machine. Gavin King peels out guitars left, right, centre, whilst Lee Newell on drums hits each note with precision. At points - on "Requiem" - the dense percussive wall of sound that was ruthlessly overdubbed may be a little thinner on stage - but the sound is still there, the intent and atmosphere conjured effectively. Close your eyes, and it feels right. Just like being there. After all, when the figures on stage are shrouded in smoke, when they are mere shilouettes in hats and the lights and sound are all you need know. It seems instantly familiar, and the actual names and / or faces of the players themselves are largely irrelevant. Some music is all about spirit and feeling, and transcend the identity of the player. The fact is, I don't know who most of the band backing Carl McCoy are, and I don't much care, because they are the Nephilim, who were always an idea instead of individuals. The spirit of the music lives through these musicians, and even though most of them on stage haven't played a note on any Nephilim record, there's no sense that these are a session band or backing musicians but a band - albeit one that performs music written by other people. Over the course of two nights, this finely honed machine repeat just a handful of songs each night (surprisingly, one of these songs song is the live debut of "From The Fire", taken from the 2002 album "Fallen", which was released by a frustrated record company and violently disowned by the group at the time as worthless and unfinished). The first night sees the legendary "Psychonaut" and "Wail of Sumer/There Your Heart Will Be Also", which are the nearest thing Goth ever got to prog rock with ever longer, denser songs. The second night meanwhile, sees the group barely touch most recent album "Mourning Sun" in favour of long lost LP tracks from Thatcher's Eighties, and a couple of selections from 96's overlooked speed metal classic "Zoon". With so little repetition across the two shows, it's as if the band are determinedly trying to present an epic-length show spread over two nights with experiences that wildly differ. "Celebrate" is brought back to the public eye for the first time since about 1988, a ghost of a song, an echo, a stain, a memory of a song etched into an empty desolation. As the finale of a two night stand of undoubted historical significance for the band, being probably the apex of this incarnations concert career thus far, it rang more as an elegy than a celebration. The two CD's, each taken from a respective night, are in effect one concert spread over two nights, offering a comprehensive overview of the bands work, and their strength as a live act. Any doubts by the skecptical that this band do not deserve this name, or this material, is banished by the confident and powerful performance. This band may not have written some of these songs. But they own these songs. The evidence is here to see.