DEPECHE MODE - "Spirits In The Forest" 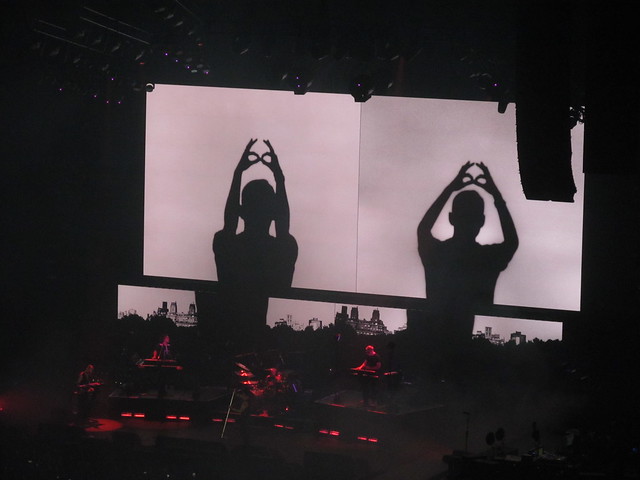 With the tedious inevitability of an unloved season, it’s time for the regular live DVD/documentary/2xCD release from the latest Depeche Mode tour. As a live release, it follows the same format as previous releases, recorded in a European city near the end of a tour, but with a twist.

The first disc is the one-day only theatrical film “Spirits In The Forest”. The second is “Live Spirits” (allegedly) recorded at the final two shows of the tour, alongside 2 live CD’s with the concert soundtrack.

Overall, it’s an underwhelming release. First and foremost, “Spirits In The Forest” seems to take a cue from the “101” movie 30 years later, following the same template, but with far smaller results. The idea of following a handful of fans as they tell their stories and travel to the final show of the tour is fascinating, but the results are simply impotent and limp. To be honest, this is like the band tried to copy Jeremy Deller’s far superior The Posters Came From The Walls, or the equally cringeworthy Springsteen And I, but chose people with no story to tell. I learn nothing about the band, or the people in the film, through this. The songs from the concert that intersperse these shallow and dull tales are chosen without any apparent care or skill, and the tales being told shed no light on the band, or their art, or their cultural position in the world, and express nothing more than the fact that the bands music was something the fans listened to when their lives were hard. I get it. Lives are hard. But the people they chose aren’t telling stories worthy of the attention passed onto them. There’s no insight here. There’s a great movie about Depeche Mode, fandom, and the cultural significance the band have/had, and the Jeremy Deller movie is it. It doesn’t help that the band themselves are mute, and say nothing throughout the whole thing, so its actually impossible to do anything but endure vapid comments from inarticulate fans with mundane stories whilst waiting for a snippet of randomly inserted concert footage every ten minutes. I’ll not watch it again.

The real draw then, is the full live film of the bands last two Berlin shows. Over the two nights the band played a total of 31 songs, including bringing back a number of songs from earlier in the tour that haven’t had a live release at all. Naturally, when faced with such an abundance of riches, this live release shoots itself in the face by featuring all 20 songs from the final show, and none of the 11 they only played on the first night (including several – “So Much Love”, “Corrupt”, “Barrel Of A Gun”, the acoustic “Strangelove” - that have never been released in live video form). The sound of a ball being dropped is deafening. By the time the tour drew to an end, the band had stopped playing almost every song from their “Spirit” album, so 17 of the 20 songs on the set are former singles, and almost all of those have been tour staples for the past 30 years and released countless times on near enough every live DVD for the past twenty years. Make no mistake, live Depeche Mode are a great band, but they’re also a glum, gloomy hits machine, like a self-loathing AC/DC that ignores huge parts of their career in order to get the disco dads and miserable mums dancing in their seats.

It ends (near enough) where it started. David Gahan's first audition for the band was singing Bowie's “Heroes” in a small room in Basildon in 1979. Tonight, the band play the same song in tribute to David Bowie : in a stadium in a German forest. It's a long way from home. No matter where we are, never forget who you have been and where you have come from.

After that there’s “Just Can’t Get Enough”, which seems to have been recorded by a different band with the same name, 38 years ago. And then, like that, maybe Depeche Mode are over.

So “Live Spirits” is a well shot, adequate live film of the last Depeche Mode show (for now, maybe forever). But it’s also a disappointment : the song selection misses eleven songs that were performed, the documentary is boring, and there are no extras at all : none of the many screen films shot by Anton Corbjin, no interviews, no documentary footage worth watching, no videos, not even the studio recording of “Heroes” (that’s on their YouTube channel), nothing at all : it’s a spartan package of a live show and some tedious interviews with some nobodies that you won’t watch twice, padded out to give the illusion of being more comprehensive than it is. 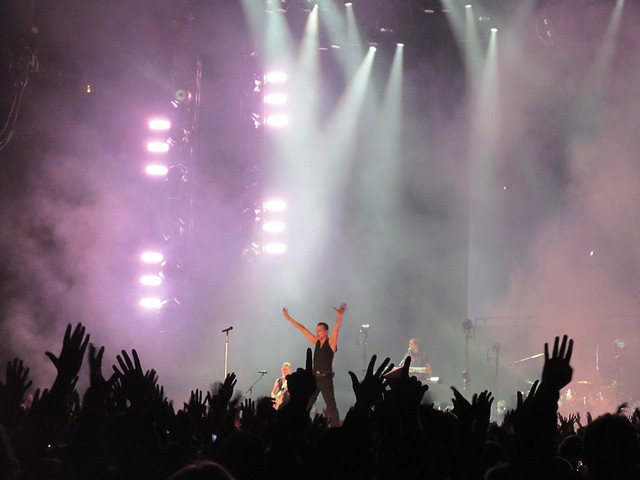