Flash, who I seem to be linking to a lot has a list of his 5 Celebrity Exceptions. These are the 5 celebrities you would sleep with if you could. I'm quite lucky - not only do I think that Gay For Johnny Depp is the best band name ever and not a statement about my life - but Ellen has discussed all these things, and if I ever have the opportunity, as long as I ask first, it shouldn't be a problem.

Reminds me of that Irvine Welsh story. Never going to happen. Oh well.

01. Drew Barrymore. I know that she's an ex-junkie, had a rocky ride in relationships, etc., but not only does she look fabulous, she also seems really nice and genuine, and that's always attractive.

02. Louise Wener . Former singer in Sleeper. Clever, funny, and an author. And the breathiest voice ever.

03. Alyson Hannigan.And if you don't know what it is about bisexual American redheaded nerds with a love for cats, computers, an insatiable thirst for knowledge, and kooky dancing, then all hope is lost.

04. Natalie Portman. Because she's worth turning to the dark side for.

05. Sophie Ellis Bextor. I don't know why. It just seems the right thing to do. 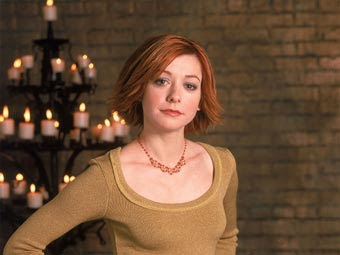 Though in confession time, I'm finding little fancies for pop stars and movie stars a little sad really. In reality, I'm far more attracted to real people : ones I've met and sometimes have become friends. Whenever it was I met them, for whatever reason, we were unavailable. One of us was involved, or both were, and whilst we liked each other, and I suppose, in different circumstances, we both knew that maybe. And then the time passed, and then it never was. Oh well. It's the way life is, and I wouldn't change it for the world. *

Well I would change it for the world, but maybe not for all teh tea in China. If you're offering chocolate..

Oh, and by the way, if any of you want to chat to me on either Yahoo Messnger, or MSN Messenger, let me know in the comments box.
- posted by Mark @ 12:08 am


Comments:
What? no kelly Macdonald? I guess she was number 6, just like the prisoner

Ozbhoy has a thing for Alyson too.

Sure, it's silly and a bit sad to pick out your celebrity exceptions but I can't see the harm in it unless you ACTUALLY think it's going to happen. It's just something inane to do with two minutes of your time. Completely fluffy fun. Let it be so.

but I KNOW...as soon as Alyson Hannigan gets my phone number there's going to be some changes round here....

Oh, Alyson, she is a dream isn't she...As an avid Buffy fan, I can and have watched all of the episodes where she turns "bad" a number of times.

Is she bi in real life because if she is, we might have to wrestle for her.

I think I just shed a tear.

Di once showed me a pic of her in underwear and i made an involuntary noise. I had no explanation but thankfully Di took it well.