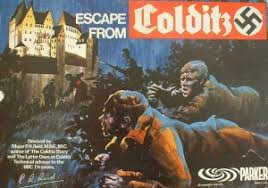 My brother wrote the other day about how his circle of friends has shrunk. How they’ve all got married or got kids or both, how they’ve gotten boring and never go out anymore. Truth be told, I’m one of them too.

The last time I went to a nightclub was around March 2002. I remember it very clearly, for the wrong reasons. My rather drunk then-wife decided to assault me. (She has a different interpretation of events, no doubt justifying leaving huge gauge marks on my neck). These days, I’m always peeling off home around 11.00, always have an eye on the last train, always looking for an escape route like a trapped prisoner in Stalag Luft 15. My evenings out have become “Escape From Colditz : the Board Game!”

You may remember, about two months ago, I think I may have been propositioned of a sort by someone. I had to duck out, even if I hadn’t wanted to. In my first marriage, I was punished for the things I didn’t do. I had to live under the eye of paranoia : she would read my text messages when she thought I wasn’t looking, surreptiously check my email, never put out as ‘punishment’ for my supposed infidelity. In divorce papers she claimed that I had stated we had an ‘open’ relationship. I was being punished for the things I didn’t do and as a result, I wanted to do them. Because I was sick of being trapped in a loveless, paranoid sham with a woman for whom the word 'self-fulfilling prophecy' was coined. If I was being punished, I might as well commit the crime. She pushed me so far away from her for fear of being hurt, she hurt herself.

In the end, I stopped going out because… it gets repetitive. The same places, the same loud music – and inevitably the music is either generic chart dance crap, or newish indie stuff that I’m not up with because I gave up buying the NME last millennium. And it’s easy to get tired. These days I treasure lie-ins and early bedtimes, because 2 year old’s don’t sleep in until mid-day. Also, I don’t like to get drunk, because if X needs me, I’m going to be no good if I am even vaguely intoxicated.

At some point I think I stopped living life and became boring despite myself. The idea of being awake at 2am seems a bit like some form of hell to me these days. Sweet, sweet, precious sleep. Exhaustion and debt are my nemesis. (Or is it nemesii? Answers on a postcard please)

Going out is boring and expensive. It’s hard to have a conversation with someone when the DJ is playing “I bet you look good on the dancefloor” at ear-splitting volume, and these days, in the possible event of me being single, I’d rather not do what I used to and I’d rather exercise some quality control. Not saying that of the people I have slept with that they haven’t been quality, but some of them haven’t necessarily been right for me and I don’t want to squander myself anymore. There was a time I’d sleep with anyone, which hasn’t been the case for 5 years and 6 days now. My first wife vanished into the thin air 5 years and 6 days ago. She was my last big mistake. (Everyone after that - not that there are many - was a good choice I thought). And the bigger the mistake, the bigger lesson learnt. I’m glad we didn’t have kids – what terror life would be to have to negotiate with her access to my own flesh and blood.

One day I will be free. The mortgage will be paid. The debts will be slaughtered. I will be able to enjoy the fruits of my labours. These days I am slowly crawling out of a hole I have been pushed into. I make no apologies for it : I was, as ever, underpaid - at one point I was the lowest earning person in my field in the entire country on £5,900 a year. And then when I was paid a decent amount, I found myself paying back what I owed. I owed because I spent years living and working for bosses who ran businesses. What they failed to realise, as any and every employer does, is that I am running a business called my life, and I too, need as much as I can get. I don’t like the fruits of my labours and my hard work being diverted to help a millionaire buy some grand art or a new house, whilst I myself scrabble around for pennies when there is too much month at the end of my money.

My life isn’t perfect – far from it – and there is one particular big bugbear I am desperate to resolve and am working hard to fix behind the scenes. When that demon is put to rest I will let you know. But there is plenty of good in my life, and I acknowledge the good that I do have in my life. Even if one of them gives me colds with his snotty 2 year old kisses. It’s the price to pay for fatherhood. Nothing good comes easy, it’s true. But why does the good have to be hard to find? 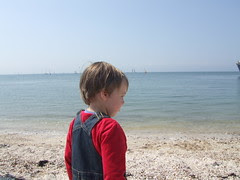 
Comments:
You've got to keep fighting the fight mate.

I feel defeated, boring and skint 24-7 these days - but I'm going to keep struggling, fighting and grasping for my piece of the pie - just to be an irritant if nothing else :)

Like you say, in the future the debt will be gone and I will have peace of mind over other things - my "30th February" will show up one year, i hope.

I'm in the same situation as you, in that I'm a similar age (or perhaps the same age, 34?) and completely fed up with pubs and clubs and the like. Going out bores me senseless. But I don't have a partner or a family, so I find myself spending pretty much all my time alone - like your brother points out, most of my friends are married with kids, so even if I did want to go out larging it, I'd have no-one to do it with! I feel completely stuck and the thought that this might be "it" for me is absolutely terrifying.