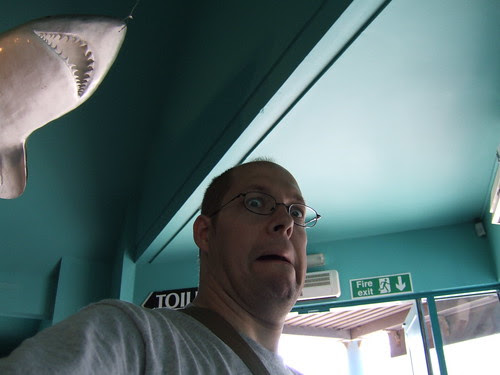 It's been a fairly busy day. I had a lie-in til 10am, where I was rudely awoken by the postman. This is the first lie-in I have had in... well, I can't remember when : May, at least. These days I am normally awoken at 6.52am (sometimes 6.47am, sometimes when I am lucky 7.20am), by a little boy. He opens the door, pulls at the covers, climbs into bed, taps my face, and asks for milk.

Since I pulled a muscle in my back, I couldn't actually face getting out of bed. It felt as if everytime I moved I was being punched. In the end, it was the knock of the postman that did it for me : I half fell, naked and without my glasses, down the stairs to recieve my copies of the Disco 4 and Control CD's. I particularly enjoyed the Disco CD. In the meantime, the machine has slowly been transferring all the Radiohead stuff onto DVD : several television concerts and other TV documentaries. It's a good thing I get into the 'zone' with a band and like to listen to them to the exclusion of anything else for a day or two at a time. I am currently in the phase of sorting out all my VHS into band- and time-specific orders. Taking a while, but I've got at least half of the tapes done so far. I'm still wondering what happened to my copies of Oasis at Glastonbury 2004, and Radiohead Glastonbury 2003, mind you.

Was very busy today. Despite not having a job, I had a lot of catch up to do, and thus washed, dried and put away all the clothes, did all the washing up, tidied up the house of accumulated baby crap (a 2 year old gets EVERYWHERE), did the vaccuming, applied for several jobs, sorted out the paperwork, filed it away, went through the old videotapes and filed them where appropriate, and generally did a lot of catching up. Not managed to catch up with all the DVD's due, but there's still time. I have been busy and order many things due to come through my mailbox soon : aside from all the stuff I've reviewed, there's still REM Live, Alfred Hitchcock : The Complete Collection (no such thing, but dirt cheap), and Alfred Hitchcock : Master of Suspense (between those two I will manage to get 21 of his 22 final films, which is a good result for £34.98), as well as the 'original' copies of Joy Divisions Unknown Pleasures / Closer / Still. I've bought a few things recently I've wanted for a while, and now I have both a redundancy payoff and a new job, I feel I'm entitled.


Comments:
I'm good, thanks for asking. I hope your back feels better soon.

I'm ok really, a bit depressed but you know how it is when you've been dumped. Feeling a bit like i've got a cold coming on and the drugs haven't worked they made me worse!

Can you stop talking about joy Division as I'm trying to stay in a happy mood and listen to happy music, i know if I listen to Transmission its a Helter Skelter downhill from they and i'll be on the Skids in no time. Can we talk about happy music. Where did I put that Aqua CD?

...if it helps I saw the last ever Aqua gig at Roskilde in 2001 supporting Nick Cave - and they were brilliant!

that makes me feel a bit better..."Come on Barbie lets go party!"

you have just seen the look my boss just gave me as I've just turned on Aqua on the Zune.....Doctor Jones to be precise, any goth cred i had is now gone up in sparkley pink pop