It's been a long twelve years since the last official live Metallica DVD : yes, there was "S&M" in 1999, but that was Metallica with an orchestra, and not at all representative of the band, nor the way they have been for a long time... and now two come at once.

Like "Francais Pur Une Nuit", "Orgulla, Pasion Y Gloria" is a undeservedly exclusive entity : this edition - 2 DVD's and 2 audio CD's - is `officially' released only in Argentina, Uruguay, and Chile : which means that you cannot even buy it in the country that it was recorded. Thanks guys! Still, thanks to the world of Internet Mail Order, you can get a copy for a much smaller amount. 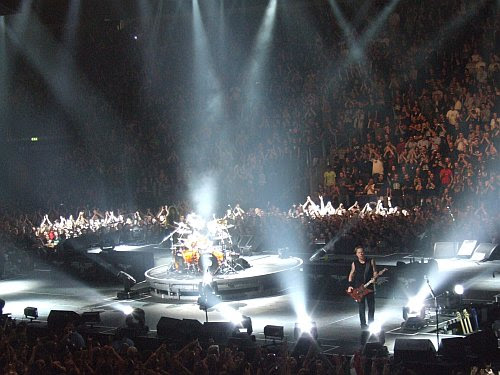 And this is how its done. There's certainly no reason artistically why you shouldn't be able to buy this from your high street : as a concert document, a record of four multi-millionaires playing mostly twenty year old songs in a football stadium in a foreign country, there isn't much better.

At this stage in their career, and hot on the heels of a genuine return-to-form album in the shape of Death Magnetic, Metallica should be pushing forward with new stuff : not kowtowing to their past. Sadly, the first DVD and the two audio CD's of this box set are determindedly retrospective : of the eight songs regularly played live from the new record, there's only three here. (Three extra songs from the new album also appear as `extras' on the somewhat expensive deluxe 2DVD+2CD version).

In fact, it's six songs, and half an hour into the main show, before Metallica play a single song that is less than twenty years old. There have been times when even I have refused to see the Rolling Metlicker Nostalgia Set live, because I, for one, think the new material is as good as the old, and I've seen they've performed "One" around 1,188 times, so really, a band performing twenty year old songs in a stadium which is ten times larger than anywhere they headlined when they wrote those songs seems to me to be a creative act of self-exile. 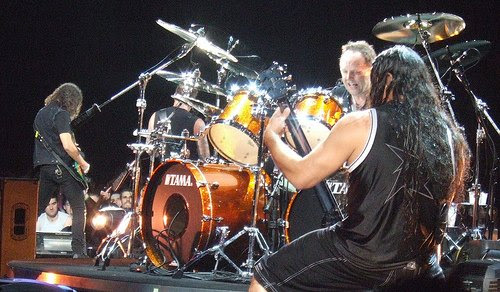 Which is a damn understatement : their albums this decade - the under-rated "St. Anger" and the near perfect "Death Magnetic" - rank creatively with their better-known work. The fact that even Metallica themselves are sidelining their latter-day relevance in favour of a history lesson is an act of self-deception. Why the best two Metallica songs in decades - "That Was Just Your Life" and "The End Of The Line" - have been banished to a second DVD as `bonus' tracks when these two songs opened 80% of the tour shows and are, with no understatement, stunning, is baffling and kicks Metallica's perception to that of a nostalgia act : they deserve better.

Still, from the opening "Creeping Death" to the final, traditional "Seek And Destroy", the main event is a two hour précis of Metallica's strengths and weaknesses : on stage, they've always been a powerful proposition - on stage is where they exist and where they excel. (In all honesty, I rarely listen to the studio albums, and thus, songs they rarely play live practically do not exist to me). The songs are dispatched with a finely honed, ruthless efficiency - even those who are rarely played ("Fuel" gets its third outing in a year, "Trapped Under Ice" it's eighth performance, ever) - roar and bounce. There is an element of muscle memory in these performances, a fluid, unthinking, instinctual reaction where the band cease to think about what they are playing ... and become the song itself. When the double-bass drum rolls underpin songs such as "Blackened", all I can think is how Metallica deserve their fearsome reputation as one of the best live bands of all time : how they have managed to attain a unique position by defying the convention and creating a genre all of their own, blending elements of classic thrash metal, prog-rock's propensity for shifting time signatures and epic-length songs, and fiercely melodic songwriting to generate an individual and self-contained, durable musical world. Even now, 24 years later, "Master of Puppets" sounds as fresh as the day it was born. 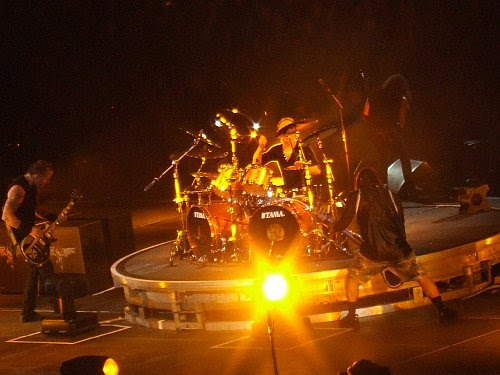 Visually, this is a fine package : but not perfect - the concert is interrupted frequently with moronic interviews with weird, scary fans in Nacho Libre masks and squealy teenage girls, which is a real pain. The interviews with the band are interesting, but far too infrequent for my liking. The editing is clear, thankfully avoiding the epileptic judder of multiple quick-cross-cuts, but a reliance on helicopter shots creates a strange distance and pulls you out of the moment. Still, at that point, I was playing air guitar in an empty house, so no one really noticed. Thankfully. Aside from that, the "World Magnetic" tour staging - of rotating coffins, mirrors, and explosions, is sorely missing ; replaced by a generic stadium stage. But when the music, and the performance is so committed, and that's what you're here for, it's hard to fault.

The deluxe edition of this overcomes some of these faults : 2 audio CD's form a cohesive and superlative live selection. A second DVD features every song performed over the three nights in Mexico not on the main disc - a total of 35 songs with a cross-section ranging from their first album to the latest.

This is a definitive, exhaustive package, an important and essential addition to a Metallica fan's collection : the band are back at the peak of their abilities, and the deluxe edition is a weighty, enormous, and stunningly powerful concert document of one of the most powerful live bands on the planet. 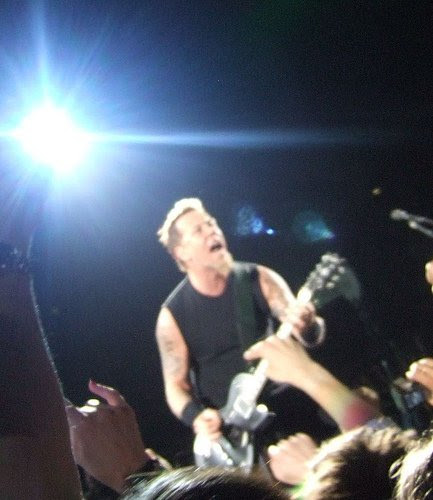