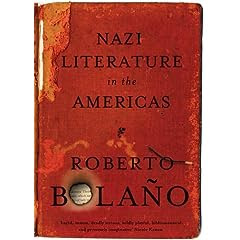 The alternate history is a staple of modern fiction : "Watchmen", "The Man In The High Castle", and many others give us a flavour of all that might have been but... never was. Whilst this may read as a list book, it is far more than that - surmising the multiple details and mass of useless biographical detail that some may use to tell just one story - in favour of a sketch that says more than a Bible. The writers fleshed out are portrayed efficiently and tellingly with brief but versed, skilful writing. Each one has a distinctive personality, a plausable tale, and form a cohesive whole as a realistic versimilitude of a world that doesn't quite exist yet so clearly almost did and almost could. Instead of using this as the base for a dull, predictable thriller about Nazi Gold, the Illuminati and Kryptos, Bolano does a grand job of saying so much with little, and thus, this is a fascinating excursion and an effective, fascinating interpretation of what was possible but thankfully never came to pass.
- posted by Mark @ 10:03 pm