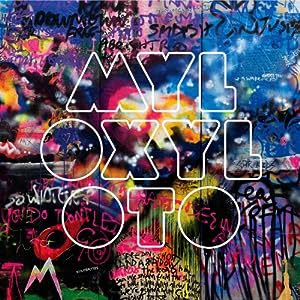 Am I going to buy this? Of course I am. But with the nagging sense of guilty pleasure that I shouldn't. A far cry from where they started, Coldplay have now melded into the kind of band that were they around 22 years ago, I'd despise with every fibre in my body, with the pretentious wank album titles, in foreign or imaginary languages, and production by the ever less interesting Brian Eno. Taking their cue from U2 of the Eighties, Coldplay have mastered the art of unchanging lineups, a predictable album every few years that is both abundant in Coldplayisms and lacking in anything like fun, and general limpness.

The whole thing opens with “Hurts Like Heaven”, and it could be exactly the same as any song on any other album of theirs in the past decade. The problem with Coldplay is they always try for the uplifting apology of a song that challenges nothing, and tells you that your commute is going to be OK. Chris Martin has sunk into a world of bland, and dull truisms, and near meaningless lyrics as if it were his only language. How can heaven hurt? It doesn't. Why write a song called “Hurts Like Heaven”, unless you are either a) recovering from a painful operation or b) a illiterate buffoon. For my money, Chris and the Sleeperblokes probably don't know exactly what they are going on about, and baffled by why their blandness could be so offensive. It's hard to image Coldplays entire recorded output demonstrating the passion of one minute of an average Metallica b-side.

At the very least if you must copy U2's career so slavishly, you could get an edge, as The Edge himself is busy. “Paradise” for example, is another bland, midpaced bit of crooning from a male (not a man) who cannot believe his luck that a movie star is married to him, the soft sap. There's nothing but bland, dull, tedious, apologies for songs here. If they wrote a song called “Invincible Badass” you can still bet he'd up apologising to the listener for being so strong and exposing the rest of the world's unbearable wimpiness. What a limp noodle.

“Charlie Brown” is practically aural sludge designed for people who think they like music, but don't. On a generic, recycled riff – you can sing 2005's “The Hardest Part” over the musical backing perfectly, as the two share the same key, tempo, and structure. No doubt this song will see a glorious O2 at Christmas, festooned in confetti. Is that the point? To comfort the listener, and tell them everythings gonna be OK, listen to this, pretend you are alive?

It's art made by people who don't understand artistry. There's a much wider world to this. I can't imagine the band ever having that moment – the same as great bands do – when they realise they've written a great song and the world must hear it now. That's surely what makes all the flying around, the TV shows, the early mornings and late nights and mansions worth it : the money, sorry, I meant the music. At a time it becomes a habit. This is an album made by a band that have settled,comfortably, into dull alcohol soft middle age, and lost sight of what makes the reason d'etre, what makes it all worthwhile : good, essential music.

“Every teardrop is a waterfall” is OK, build on rising/falling cascades of chords, but again, fails to break out from the self-made prison of Brian Eno, clean guitars, piano chords, and soaring-like-an-eagle-MOR-vocals. What is the point Chris Martin is trying to make here? Words matter in songs, and this one is awash with dull and lyrical vapidity, a nothingness of sound. I'm sure that the band have a great ball making records like this, but it doesn't engage in any meaningful way, just being platitudes and cliches. Bono may be a pretentious numpty, but creatively he's miles ahead of Martins neutered apologies and half-baked philosophies.

What Coldplay need to do, if only for their own amusement, is get a sense of humour, a sense of irony, a sense of something other than being a uber-sincere set of green-trousered pop peddlers speaking only in mid-paced, Brian Eno produced cliches and do some kind of radical rethinking and or reinvention : if not, a career as the MOR-stadium Def Leppard for people who think Led Zeppelin are a bit noisy is the summary of a life. With that much money and success, Coldplay can do whatever they like next : and what they want to do is be boring and dull.
- posted by Mark @ 8:55 pm