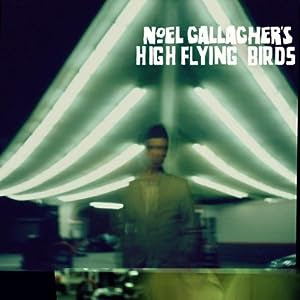 Does the world need a Noel Gallagher album? Probably not. To be frank, he should've sacked the lot of them, and gone off out under his own name thirteen years, with “Be Here Now” as Oasis' sad implosion, before they became just another band. Now, too late, to be honest, the one with talent comes out and makes his first solo album. Solo hell. From here it's all respectable, steady sales and second on the bill at festivals but never, ever headlining Wembley Stadium again. But who wants that?

What this album is though, is Noel Gallaghers solo album. The split from Oasis certainly wasn't musical. You could imagine an album made of half this, and half Beady Eye, as the next Oasis album, and you wouldn't know the band had split. Gallagher's voice is perhaps, the voice of a talent who needs a rock edge : Gallagher is easily the brightest spark in his former band, and this album is yet more proof. The strings swoop and sing, Gallagher repeats his meaningless/meaningful lyrics like a child reading out from a book without knowing whats going on, but that's not a bad thing – the listener can come to this and project their own world onto the aural canvas here. “Everybodys On The Run” is the kind of song that his former band would effortlessly earmark as a mid-album lighter-waving classic. Though, perhaps known to fans in trading circles, “I Wanna Live A Dream In My Record Machine” and “Stop The Clocks” are well known, and not really as good as anyone thinks. Ultimately though, this record is a midcareer release from a songwriter who, were he have gone solo a long time ago, would be revered by a select few – like the Buckleys, Neil Young, and so on, and songs such as “Dream On” would've easily sat on any one of the dozens of Oasis singles as an average b-side – that is a very good song dwarfed by an a-side that was probably Godlike in scope : and that this, like Beady Eye, is the sound of an artist almost incomplete : there's good work, and lots of songs as good as anything Gallagher has released, but perhaps, the world doesn't need a Noel Gallagher album anymore – its the soundtrack to a night out,árms around your mates, wishing you were 15 years younger on a week night, not drinking too much because you have to go to work tommorow.

Well... that's a harsh interpretation. Gallagher has made a good album that sounds like a clutch of Oasis b-sides – true to form, I suppose : and that suffers only because Oasis a-sides were so damn strong.
- posted by Mark @ 10:09 pm