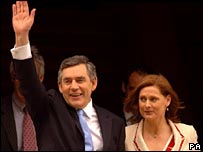 There is a new Prime Minister. It's been a long time since this has happened. So much has changed in the past ten years, 1 month and 27 days. I remember the glory ofthe day, the insane optimism, where we felt that at long long last, we'd kicked the Tories out. Little did we know, all politicians are human, corrupt, flawed. I don't think anyone would guess how far from grace Blair would fall in the subsequent years. Probably the lowest point of his entire misrule was 2003 when a mild-mannered weapons expert was killed by MI5 found dead in Harrowdown Hill, when the armies rolled into an illegal invasion and deposed a dictator, when over 2 million protested against the war.

One can only hope that Gordon Brown will do a much better job.
- posted by Mark @ 4:39 pm


Comments:
Meet The New Boss, Same As The Old Boss?