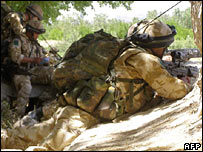 Apparently England as at war with Afghanistan. And Iraq. Hell, is there any country we aren't at war with? I just want to know, to be sure. Because it feels as if England is dragging its ass all over the world beating up other countries. Other countries whom I'm fairly sure haven't declared war on us, but have naughty people in them - and they're apparently planning to do something. To be honest, I'm confused and fed up - can't everyone just get the fuck along and live and let live? Damn stupid human beings.

Other than that, I'm also finding it ... a little odd when I read about soldiers being blown up in Iraq and Afghanistan. As if I'm meant to care. For some reason, I'm generally rather lacking in sympathy for soldiers. They're trained, hired, professional killers - and being killed is a risk of their job. Like a firefighter, or an astronaut. As we all know, any human death is a tragedy (and a million is a statistic), but this isn't an unexpected, random event : it's trained, hired killers in a war zone. I'll cry no tears for them. I hope none of them do die, but if they do, well... it's a risk of the job.

Time for me to cheer up, and stop preaching, I think.


Comments:
Technically we're not at war *with* Afghanistan or Iraq but instead we're at war with insurgents trying to overthrow the elected governments of those countries.

Still, it's a big sack of shit what ever it is.