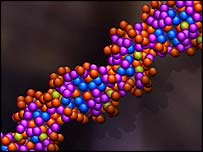 I used to work with the organisation which administers the National DNA Database. At the time I worked there the DNA database was rather small and in it's infancy. I did some fairly advanced stuff and spent a lot of time working with some world leaders in Forensic Science. It was, if nothing else, a fascinating place to work (as indeed have my past three jobs been).

There is a lot of debate about if there should be a National DNA Database and should everyone be on it. I'd like to know where you stand on the issue. For me, it's an open and shut case. I find the constant demand by authority to surveil us disturbing. It worries me that our rights to privacy and to carry about our business without being recorded, watched, matched, analysed are being stolen and it appears that nobody cares what the people think about it. It's my DNA. My image. My choice.

Not theirs. I know enough about Goverment projects to know that, best intentions aside, the information is not secure. You can't trust them. Eventually, the information there will be abused. Nobody will ask your permission : it will be sold, or leaked. You will not be able to control what happens.

Another Constable writes about this. As does The Graniuad and Stef.
- posted by Mark @ 8:50 pm


Comments:
Anyone who sacrifices freedom for security deserves neither.