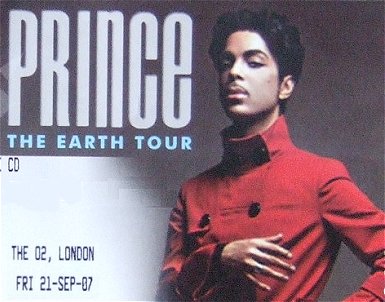 Prince is a legend.

There are some artists you need to see before you die if you ever get chance. Even if you don’t like them, they’re the Blockbusters. The Must See. Prince is one of these. Ranked up with James Brown, U2, The Stones. Even if these days, consensus is that his recorded output is lacking, a Prince show is always regarded as an apex. A man at the peak of his creativity.

Over these 21 nights, Prince has taken London by storm. It was an audacious, gutsy move – for an artist who hasn’t troubled the charts (except by virtue of regular Hits compilations) since the early 90’s. Tonight, the last night of this definitive event, Prince eschews his occasional forays into his recent work in favour of a stunning, non stop, two and a half hour romp through the best of work.

To some, Prince is funk in a purple suit. To others, the best guitarist since Hendrix. To the rest, a fiercely individual maverick pop genius weirdo. To me he is all these things and more. Backed by a 11 piece band with horn outfit and four dancers, Prince appears from nowhere in blinding lights and smoke, a shilouette of promise and expectation, and his band strike out the relatively unknown “I Feel 4 U”. On record, this song is a slightly-underproduced piece of competent 70’s funk pop. Here and now, thirty years after it was first committed to vinyl by a teenager, the 40something Prince and his band turn it into an enormous, rampaging monster of one unstoppable groove. London seems entranced. 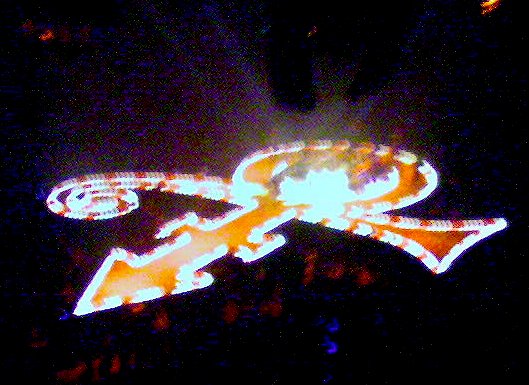 Make no mistake, Prince’s band are tight. Able to drop a beat and switch moods in a nanosecond, the finely tuned unit are a fluid foil for Prince’s muse. (Though, at first glance, his drummer is phenomenal, closer examination reveals that she is playing along to a preprogrammed rhythm track that adds the numerous fills and sidenotes that are part of Prince’s trademark sound). The first part of the set sees his band exploring lesser known numbers from his 47-album strong catalogue as well as stonking pop moments such as “U Got The Look” and “Cream”. After an extended jam of “Pass The Peas” – proving, for me, that Prince was even funkier than James Brown – the set draws to a close the first forty minutes of bliss.

It’s at this point, the massive arena awash with purple glow sticks (provided to add flavour to the upcoming DVD of the show), that Prince stops messin’ about and moves straight onto the Hits. Sat behind a keyboard alone, the man provides a largely improvised pick-n-mix of his hits. In this pop moment, Prince proves he has a catalogue of classics to rival and beat anyone else in the world. A one man Motown. In fact, he has so many songs I can’t even remember the hits he played. He would leap from the opening lines of “Take Me With U” before tinkling out the familiar chords of “I Would Die 4 U”. Faces would beam into recognition as Prince gives us the opening lines of “Diamonds And Pearls” and then he seamlessly drops into a different classic.

These songs are perfect pop. Unforgettable. And as soon as he’s played one, you wonder to yourself – “how can he top THAT?” – and before the thought leaves your brain, he’s started yet another song you’d forgotten existed yet clutch dearly to your heart as soon as you hear it. Watching Prince is the pop equivalent of the best sex of your life : just when you think you can’t get any higher, you’re elevated to a previously undreamt level of emotion.

Breaking with tradition of yore, Prince plucks open some familiar notes on the piano, and then, and without warning, his band chime into Purple Rain. Stood there in Block 417, I’m watching a sea of purple light, and this pop wonder, and thinking that everyone in the world should experience “Purple Rain” live at least once in their lives. This song is very much Prince’s defining moment in a career made of definitive moments. The arena choruses every line, hanging on every word.

Prince is a genius in every respect. But you knew that anyway.

So how can he top this? 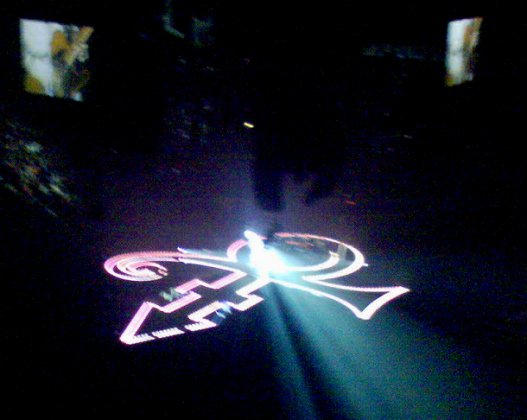 Seconds after the song comes to a close, Prince is back on stage, glued to his guitar, making the plank of wood and string sing like a siren. It’s “Lets Go Crazy”. It’s “Kiss”. It’s “Guitar” (his best song in decades, and proof that age doesn’t preclude talent). It’s “1999”. It’s the incomparable, fabulous “Nothing Compares 2 U”.

It’s everything this arena wanted – one night of perfection and every Prince song everyone knows. (One could quibble there’s no sign of “I Wish U Heaven”, “Glam Slam”, “Gett Off”, “Sexy MF”, or “Batdance”, but Prince is no human jukebox put on this earth to please others and his best known songs aren’t always his best)

Nothing good lasts forever, and this final night (and thus, this legendary residency), must eventually end. For us, Prince again ushers in a lullaby behind his keyboard, and provides ten short minutes teasing us with “The Most Beautiful Girl In the World”, “Alphabet Street”, and closing the piano set with the fabulous “Raspberry Beret”.