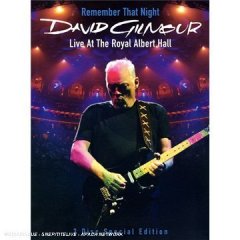 The nearest thing you will ever get to seeing Pink Floyd again.

"The Voice And Guitar Of Pink Floyd", it proclaims on the sleeve.

It's a deeply emotive subject, Pink Floyd. Since the triumphant Live8 appearance, promoters have been waving enormous cheque books at the band, hoping to tempt the two camps into some kind of salaried, enormous tour of the worlds megastadiums for hyper profit.

What "Remember This Night" proves is that talent cannot always be bought. Despite the lure of touring under the Floyd name (which would have been an easy cashcow) and coasting on former glories, Gilmour chose to put this venture out under his own name, which, given the intimately personal nature of the accompanying record ("On An Island"), is only appropriate. Also, the tour is accompanied with an album of new material . No nostalgia smash'n'grab from the artistically bankrupt here.

Captured over three nights in London at the conclusion of the tour, the DVD documents, as best as one can, the exact emotional temperature of those shows. Musically Gilmour and his band (comprising 71.4% of the most recent touring lineup of Pink Floyd : only a second guitarist and that all important drum stool differ) are a precise unit - the music is fluid and faithful to the spirit of the recorded versions, the band are able to improvise and follow the muse of the moment, and to all intents and purposes, this is the closest thing you will come to Pink Floyd.

The first half of the main set - aside from opening with a brief précis of part of "Dark Side Of The Moon" - comprises of the new studio record, recreated live in it's entirety (following the Floyd tradition of sets since the Seventies). In concert, the material fulfils it's potential as a cohesive unit is, frankly, far better than the recorded versions. The second half sees Gilmour and his band offer a 90 minute set of Floyd classics. Eschewing obvious crowdpleasers such as "Money" and "Another Brick In The Wall" in favour of lesser known - but equally valid - LP tracks, the band offer the closest thing there is to Pink Floyd in the world. Note for note, you could listen to this - and there is no way you wouldn't know it isn't the Floyd themselves. Highlights include the resurrection of "Fat Old Sun", "Wots Uh The Deal?", and "Arnold Layne" (all last performed by Pink Floyd around thirty five years previously, if at all), but for me the absolute highlight is the reappearance of a definitive, transcendent "Echoes". Widely regarded as the singularly most representative Floyd track, Gilmour and his band perform an epic, compelling version of the song that may very well stand forever as the definitive live release.

For the encores, Gilmour and Co. are joined by David Bowie for renditions of "Arnold Layne" and "Comfortably Numb" to round off a two and a half hour package that is musically a treat and visually provides a solid and representative experience of the night itself : as a concert itself, "Remember That Night" is an excellent document that perfectly captures the evening itself, doing so in an unhurried, mature visual style that neatly avoids the jarring and infuriating (and rapidly-dating) jumpcut stuttering of other modern concert videos.

On the second disc, viewers are treated to a truly bloated package that is excellent value for money. 13 bonus live cuts are included - covering the first show of the tour in a tiny theatre filmed for the BBC - alongside almost every other song performed on the tour that isn't on the main disc. (In addition there is an acoustic jam on "Echoes" that is an entertaining curio). On top of this there's three documentaries which total around 70 minutes and reveal the bands working methods and personalities in a revealing manner that seems to cover most of the tour, as well as two music videos and a previously unreleased studio jam. I'm sure there's a kitchen sink in there as well.

Whilst the package is never going to satisfy everyone (primarily because it doesn't have the words P*** F**** on the cover, nor Nick Mason on the drumkit), "Remember That Night" is a excellent package that manages to comprehensively cover and capture the spirit of David Gilmour's tour in 2006, and provide a worthy addition to the Floyd legacy. If you love Pink Floyd, you need to get this.
- posted by Mark @ 11:31 pm