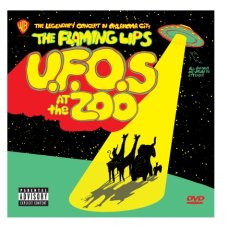 I make no secret about the fact I think The Flaming Lips are one of the best bands in the world. Their shows are enormous, joyous celebrations of life - an excuse to dress up, throw confetti and streamers around, aided and abetted by a visionary, inclusive and aspirational music for which there are no rules, lots of aliens, and plenty of improvisation.

Wayne Coyne and his merry men, having built a deserved reputation as being One Of The Bands To See Before You Die, finally capture the majesty of the show with "UFO's At The Zoo", a weird hybrid disc that is part DVD, part live album. Inside this 'MVI' disc is a DVD portion that features a full live show (interspersed with backstage documentary features), a remix-a-song package, and MP3's of the concert for your computer. Being at the cutting edge of technology - the Lips were amongst the first acts to pioneer the 5.1 DVD album, as well as the perverse play-4-albums-on-4-CD-players-at-once that was Zaireeka - "UFO's At The Zoo" manages to be all things to all men, and at the same time, none of them. It's a DVD at CD price! It's a CD box.. with an MVI disc! It's a live album.. on MP3... with a concert film?

Whatever it is, and however it works, artistically "UFO's At The Zoo" is an essential document : it captures perfectly the emotional temperature of a F'Lips show - the sense of abandon, exploration, celebration, the befuddlement at the State Of The World, the desire to somehow make music make it all better. Visually, the DVD is a treat - a finely edited piece that thankfully avoid the seeming-industry-standard for hyperactive jumpcuts, faux degradation, and other video sleights-of-hand that dated quickly and detract from the experience. A viewer of a concert video just wants to see what is happening, and recall the experience of that night for posterity : not be befuddled by an editor overdosing on caffeine and ADD.

From the opening "Race For The Prize", the Lips meanwhile are on superlative form in the grounds of the zoo at their first hometown show in many years. The setlist is by no means perfect (some songs performed almost every night of the tour, such as "Fight Test" or the obligatory cover version, appear missing from the disc, for some reason), and the flow of the show is broken up by the demand to cut-to-something-happening-backstage-even-if-its-just-pictures-of-penguins, but in some ways it's better that way : it provides a full perspective of the evening as opposed to a mere document of several thousand people in Oklahoma grooving their asses off. And what grooving there is.

With Wayne's never-boring between song dialogues as well, the disc manages to place the show in a historical context : of the voice of the ignored liberal masses living in a time of cultural madness. Songs such as "The Yeah Yeah Yeah Song", "Do You Realize??" and "Yoshimi Battles The Pink Robots" are deeply humanistic, tolerant and intelligent - unafraid to question or explore the nature of reality, whilst operating at the edges of melodic space rock. The concert itself sees the band at the peak of their powers - reminding me of the long-lost Pink Floyd of the early 70's, unafraid to improvise and explore, moving through a psychic inner space and the far reaches of art. The band move through high points of their later catalogue - concentrating on the most recent three records - before concluding with the whimsy of the rarely heard "Love Yer Brain". Touchingly, the concert ends with the band ascending into their unique UFO lighting rig, and the touching declaration that 'The Flaming Lips Will Always Love You'.

At the price, this DVD/MVI/CD/? Thing is brilliant value for money,and strongly recommended for fans of the band to investigate. You won't regret it.
- posted by Mark @ 11:34 pm