IAN BROWN - "The World Is Yours" 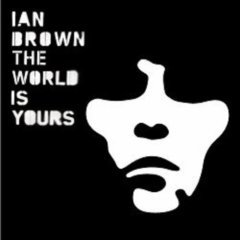 Ambitious, powerful, and unique - the spirit of The Stone Roses lives on.

Who would ever have put the smart money on Ian Brown being the one to come out of The Stone Roses as the 'winner'? Whilst John Squire vanished into mediocre pub rock, and now seems content to sell art prints of old record covers at £200 a time, Brown followed his muse and pursued his vision.

Following on from The Greatest (modestly titled), "The World Is Yours" continues the tradition of Brown as a solo artist, furrowing a unique blend of world music, epic strings, and distinctly British vocals. Musically, Brown is now a world away from his former band : there's no trace of the skinny white boy indie in his current music.

It's also a mile away from his earlier solo work : this occupies a space of expansive, relaxed beats and a lyrical mystical vision that is unmatched by anyone else. Aided and abetted by Ex Pistols Steve Jones and Paul Cook, and Andy Rourke of The Smiths, one could be forgiven for thinking that this elpee would be a rampaging rock beast, when it is very far from such... conventional thinking. Brown intones the kind of meaningless-meaningful philosophy that is his raison d'etre over the panorama of sound that soothes and informs. There's little in the way of musical evolution from his previous albums, but that's not to say there needs to be. The initial blueprint is good enough, and now Brown is refining it. Armed with a politically aware, strongly liberal bent, the album also tackles - one might say bravely - the current world political situation.

You can look in todays culture and ask yourself - where are the protest songs? The world is crying out for the modern day Dylan, the contemporary Cohen... to artistically deconstruct and lambast the warmongers in an artistic statement that is both a great work and morally exact. No chance. This generation is spineless, toothless, too busy moaning about how good you look on the dancefloor to care that the world is collapsing around their ears. It's a shame then that the nearest thing to a mainstream protest song is the blunt "Illegal Attacks" which is a lyrical jackhammer punch-in-the-mouth with the subtlety of a rock in a cop's face.

"The World Is Yours" is ambitious, powerful, and unique vision that is much wider than the musically and lyrically limited ghetto of 'cool' music made by dumb kids who deal in minutae of faux indie-labels. Oasis wish they could be even a fraction as good as this - and Oasis know they will never come near. Ian Brown shows the imitators how it can be done. And that scares them
- posted by Mark @ 11:33 pm