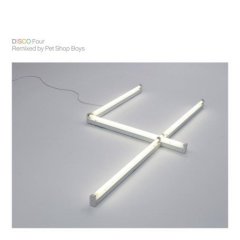 A fun, bargain priced expedition into the world of the old-skool disco epic..

One really has to question the validity of the Disco series. The Pet Shop Boys produce occasional remix albums of little real purpose except to keep the racks stocked. In the past eighteen months the band have been fiercely prolific - releasing four albums (including this one), two full length DVD's, umpteen singles, remixing almost everyone around, and touring the world without a break. Frankly, they're everywhere - and making Bono look like an underachieveing recluse. At 50-ish singles, and 26 (ish) albums, "Disco 4" is just another Pet Shop Boys album. And that's no bad thing.

Not bad for a duo of fifty something disco Gods. But is "Disco 4" any good? Well, it's by no means a 'proper' record. Think of it as an extended EP of PSB remixes and you'll do nicely. The very concept of an album is elastic in their hands : whereas an album is an artistic statement, "Disco 4" is just a collection of songs. But what a collection. Somehow , despite featuring only two original PSB tracks (and six remixes of other artists,), "Disco 4" comes across as as much a Pet Shop Boys album as anything else they've done - albeit one stuffed with guest vocalists.. In some ways the album is an exercise in showing how little the actual song matters : it's all in the production, and shows that the Pet Shop Boys are the most under-rated production duo in decades.

Featuring guest turns by The Killers, David Bowie, Yoko Ono, the incomparable Rammstein, and um... Madonna, "Disco 4" is proof of the diversity - and homogeneity - of the Boys work. Every song, no matter how bizarre, be it The Killers anthemic stadium indie, or Bowie's pounding industrial rape that was "Hello Spaceboy", are all reformed to sound exactly like the Pet Shop Boys. This could be because the Pet Shop Boys approach to remixing is deliciously simple : they throw out everything but the vocals, and start again, rebuilding the track from scratch. Therefore, even though this is ostensibly made out of remixes, it's more akin to a collection of cover versions with the original vocalists. Over the occasionally far too well known templates, the Pet Shop Boys rebuild the songs into clearly recognisable, discofied versions of the original. It's a trick they've long perfected - adding and expanding "Go West" and "Always On My Mind" to immense anthems of political disco.

Highpoints are well, all of it. Based as it is on remixes of singles, every song on here is a hit - melodically invincible, unforgettable, and moving forward on a relentless rhythm reminiscent of the class era of disco, where 12" singles were 23 minutes long and ran at 33rpm. Following this tradition, "Disco 4" is - whilst at first sight a strange prospect, a compilation of second-rate remixes - it is, in fact, a fantastic and entertaining excursion through the far reaches of the Pet Shop Boys talents, aided and abetted by a bevy of celebrity guests to create a fun, bargain priced expedition into the world of that rare beast : the old-skool disco epic. "Disco 4" is far more attractive than it initially sounds, and a fine addition to the Pet Shop Boys body of work
- posted by Mark @ 11:33 pm