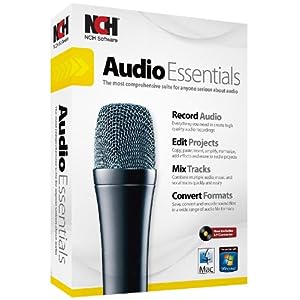 This multipackage suite of Audio, Video and Image Editing Tools is useful to the individual who wants a set of relativelyt unsophisticated but advanced options and tools ; though one could, very easily spend forever choosing between the various options. There are multiple suites within the package ; a Video File editor and convertor – useful for those obselete playback files, and lots of audio options. WavePad is the main draw for me, but the rest of the packages can acquit themselves ably.

MixPad Audio Mixer is useful for layering existing files, and creating basic multitrack audio – though it doesn't necessarily lend itself well to creating full musical tracks, as the full set of editing options on each track is awkward to control without a huge monitor setup though you can create individual effects chains for each stem. .

Sound Recorder is an adequate recording device with basic options ; nothing particularly advanced, but certainly does the job – of recording audio – with no small amount of flair and aplomb. Zulu DJ Mixer does much the same job, but allows cross fades, cuts, and pitch/speed options to speed-correct and beat match material.

PhotoPad is a more than OK, basic set of image manipulation tools ; layering options allow some bizarre results, and the controls are intuiative, easy to use, and quick to layer. Layers are also stacked so you can remove an effect added several steps ago without needing to rework the rest of the image. If you are expecting some high end professional image work here, you'll be disappointed but for most uses and applications this is a more than capable package for the home user.

WavePad Sound Editor
is a fairly useful piece of audio manipulation software ; albeit more for experimenting with finished material instead of constructing individual or original material and mixes. Loading times, even for low bitrate spoken word MP3's are high (as are saving times), though the interface is intuiative, and relatively straight forward. A minor bugbear is, in terms of conversion options, Real Player Media from the dark ages of the dreaded early internet doesn't seem here. Other tools (basic stuff such as pitch and speed change, edit and manipulation) are not always well designed – primarily the submenu buttons are in a intensive point-and-click menu and not a real time graphic interface so there is a lot of labour intensive tabbing and switching to hear the outcomes of experimentation. The experimentation is not real-time either, so you cannot punch in a setting and see an instant change in sound ; the whole file is processed before playback, and this inevitably accrues a delay in use : though you can use a preview button to hear elements of the work. The dynamic range compressor allows sonic manipulation (you too can sound as bad as “Death Magnetic”!) whilst, especially on the spoken word material the 'reduce Vocal Noise' option allows the playful to turn it into a haunting silence, or musical material into near instrumental glory. Perhaps for the best when one considers how bad some singing can be.

The sample track I used for vocal reduction was U2's “Mofo”, a fairly dense bit of work from 1997. However, on music tracks it presents a very odd and bizarre result that can often reduce the rhythm volume considerably and present an insight, though perhaps not always usefully, into some of the subsets of production. Backing vocals are not always adequately removed : in the end it sounded like a b-side vinyl only remix. The gain, delay, effects pedal switching are useful though the effects are stepped and not graded ; and whilst this will be useful in create home masters of existing tracks, it doesn't lend itself well for creation of an album to all but the most patient.

However as a fairly advanced suite of multipurposes audio, video, and image manipulation tools, this is a capable, strong package that would suit almost all your non-professional needs with more than flair and style.
- posted by Mark @ 10:10 pm