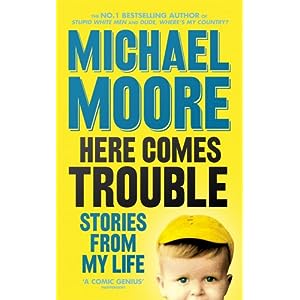 Perhaps the story least told is that of Michael Moore's life since he became Public Enemy Number One. And apart from a handful of fragments and pre and postscripts - "Here Comes Trouble", a semi-fictionalised memoir - does not reveal this. Should you want a self-aggrandising life story from Moore's obscurity years, then this is the one for you - and, with the way they are told, Moore omits some key moments, often the ones that define our lives, such as those relating to money, love, food and sleep. With all his achievements, culminating in being for a while the most hated man in America, you would expect Moore to detail how he cured cancer, solved unhappiness, and got Guns N Roses to release "Chinese Democracy", so a sense of false modesty would not become him. The verbose 400+ pages are just snapshots, anecdotes on paper to an extent, and whilst they are fascinating, a good book such fragments do not make. The overarching narrative, the sense of purpose, the raison d'etre are absent and instead we get a rambling, somewhat directionless lead to the moment that Moore hit upon, and released his first film, the low-key "Roger And Me", that showed little of the promise he eventually delivered upon, and for many of us, myself included, where Moore became more than a footnote and someone worth investigating. Or, as Sir Henry Jones said in Indiana Jones And The Last Crusade - "You Left Just As You Were Becoming Interesting!"

Presumably that is reserved for the inevitable sequel.
- posted by Mark @ 10:07 pm