PETER HOOK AND THE LIGHT : Unknown Pleasures, Live In Australia, 2010 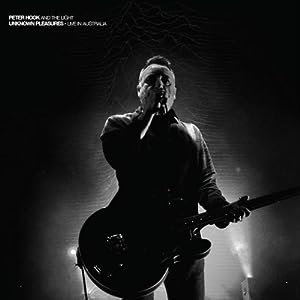 30 years after Ian Curtis suicide, and it is time (allegedly) for the band's former bassist to tour the world with a new band, reflecting in the glory of a band that breathed its last three decades ago. Taking away from the Joy Division legacy, this recreation / celebration of the debut leaves a taste in the mouth, as desperation takes hold. What more can be said about Joy Division? Not much, anymore. A brief lifespan that went from an embryo to a memory in three years, two albums, a handful of singles, and about one hundred gigs.

Is there a time in your life when you start looking back, more than looking forward, the time in your life when you become nearer to the end than the beginning? Is this then the first admission that Peter Hook's glory years are over, and now it is revision, merchandising, nostalgia? An industry of memory? I would never deny a musician the right to perform or to make money from their work, but sometimes, the respect the musician treats themselves with is far less than they deserve.

Probably. In it's absolute form, this record is a strong collection of excellent songs performed ably. Were they always sung by Peter Hook, you would never think that perhaps this band needed a different singer. But they weren't always sung by Hook. And to me, the connection between this band, performing these songs, and the songs themselves is thin. Hear the original bassist not play bass, but sing! Hear... absolutely no other original members of the band on this recording. I was prepared, and understanding, of Roger Waters - who sang and played bass and guitar - singing and playing bass and guitar with lots of former members of Pink Floyd, performing Pink Floyd albums. But when not one member of the original band is performing the original instrument it's a tribute band with one original member. Even New Order, and latterly Bad Lieutenant, that feature more than one member of the original band performing Joy Division songs felt a little generous / tenuous, but this is nothing more than a somewhat generous interpretation of nostalgia, with a slender connection to the original material in lineage and lineup. Sure, they're Hooky's songs (but not just his sole property), and he has the right to play them - but what happened to the ideals - the integrity? He has the right also, to not play them. Perhaps, were he touring a set of all his old material instead of a recreation of one album, and perhaps were he also performing a cross section of songs from New Order, Joy Division, Monaco, Revenge, Freebass, for example, it would feel a lot more comprehensive, and a lot more honest : here, the cult of Joy Division (and brilliant as Joy Division were, they are over-rated), is thematically broken. Peter Hook was but one quarter of a whole, and for one quarter to take the body of work and appropriate it wholesale (albeit under a different name), when not even performing the original instrument, and singing when not being the original singer, takes liberties with the interpretation of credibility and legitimacy.

If, on the other hand, you want to hear a competent and spirited covers band performing the early part of Joy Divisions legacy then there are few finer ways of doing so than this. The live re-creation of the sound conjours up an authentic atmosphere, with the character of the original songs retained. The passion of the performance cannot be faulted. But it is erstasz, imitation, Diamondeque, a passable fooling : like going out with a girl who reminds you of your first love, but perhaps, not quite so good. And in your heart, you know it. But you want that again. You want to feel what you never can experience a second time, for the time is gone. And, at the time, it was probably imperfect with rough edges - which time has smoothed.

Is this worth buying? If you clamour for new music, even if it is old music, then yes. But buyer beware. The vinyl edition features two extra songs as last minute "Bonus tracks", though for no apparent reason (the songs being "At A Later Date", and "Ceremony"). The CD edition has plenty of extra space left on its running time, so in practice, anyone who doesn't the vinyl edition is being penalised for preferring other formats for no adequate reason. I never get time to sit in my house on my own and listen to vinyl LP's. Sure, I could listen to this exclusive, elitist-pleasing bait by needledropping the vinyl, making MP3's, and then retagging them into my iPhone/iPod/iWhatever. But I don't have time or inclination for such nonsensical and unneccessary practices. In the day and age where anyone who actually pays for music is a weirdo, and a CD is just a set of MP3's in a box, anything that treats a customer with anything like contempt is a dangerous move. It's easy to find the bonus tracks by looking. Deliberately removing value and slicing songs off a release is madness. Don't give people less reasons to buy the product. There will be people that don't want to buy truncated product when the full show is only available in vinyl fetishist format. I can't listen to vinyl when I'm out of the house. And that's where I listen to most of my music. Not in front of a vinyl deck, fighting off a hyperactive cat and a grabby child.

If there is a valid reason (such as a lack of space on the CD) I understand not including songs on the CD release. The exclusion of material when there is space for them on the CD is baffling. "Percieved Value" is important here : people are prepared to pay for something when they feel they are getting value for it. When you remove value, and take off content, that lowers the value of the product. It's up to you. I'll just add the missing encore tracks off an audience bootleg of the respective show and live with the drop in quality. There's no reason to take the songs off the CD release, apart from pleasing vinyl-sniffing nerds.

Formatting aside, and in conclusion, "Unknown Pleasures Live" is one member of Joy Division and his mates playing 30 year old songs in small rooms, being a tribute band featuring an original member. If you have a fervent need to experience a properly recorded set of Joy Division material, then by all means, experience this. But don't forget what Peter Saville said, that this is just the merchandising of memory. This is a recording of a fine band recreating something that never quite existed except on vinyl, tainted by the notion of integrity - and ignoring it. But time then, to let it go. Go forward. Not back.
- posted by Mark @ 7:07 pm