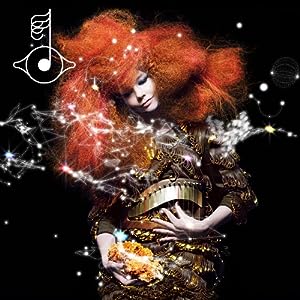 That Bjork ever troubled the charts can be seen to be some kind of bizarre moment, a brief five year glimmer in the eyes of the world, where a wayward muse collided with a open media, and a handful of very good pop songs brought her to a world larger than the Sugarcubes. With every release of the past decade, from “Selma Songs” to now, Bjork has moved ever further into her own orbit, including the ultimate alienation of the minimal “Medulla”. With great money comes great freedom, including, for Bjork, the freedom to do whatever you like surrounded by employees who agree with you. Perhaps a somewhat harsh perspective on the circumstances, but then again, Bjork has clearly gone way into her own world.

“Biophilia” is an organic record : the breaths between the words are not excised, the warmth of the room shimmers. With minor exceptions where machines whirr and drums pulse and electronics throb, this album is the product of a mostly extinct age – unique, custom-made instruments and bizarre technology, coupled with esoteric, disconnected melodies and verses – and though Bjork's voice is a thing of wonder, and as an instrument it is just another ingredient on the largely featureless landscape that is the album ; made as it is of ethereal, detached, barely-memorable songs that no doubt have been crafted exhaustively by an artist following their muse, it also gets boring – a selection of endless, somewhat identikit songs with barely discernable lyrics, unmemorable vocal melodies, and fractured glimpses of whatever Bjork brought to popularity fifteen years ago. The recent Bjork material, with the emphasis on woodwind, pipe, and ancient tin clattering, leaves me cold and even, to be honest, bored. There's little of this music that has any relevance to anyone but herslef and her shrinking, self-sufficient community, where perhaps great artists exist in isolation – but being in self-chosen exile isn't always the place you want to be.
- posted by Mark @ 8:29 pm