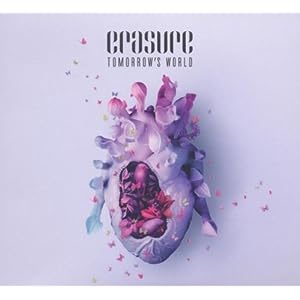 At some point in history, perhaps imperceptably, Erasure turned from a glorious pop act to something resembling a kind retro-futurism – a world that could have existed but never quite did. The chart troubling days of a string of number 1's and 8 nights at the Birmingham NEC or the demolished London Docklands Arena long gone. The question is – like many bands of a certain vintage – is how do you stay relevant? (and if not to anyone else, how do you stay relevant to yourself?) Or.. does the act of making music become a habit, a job, and mistaking saying something with having something to say?

“Tommorow's World” - Erasure's umpteenth album – goes no further in answering this. People and culture changes over time : Erasure moved down one avenue. The world went down another. Not that this is necessarily a bad thing, but the Spinal Tap world of an ever more selective appeal is imminent. A glorious future behind them, Erasure are now a heritage act. How many times can you say the same thing? How many ways? Before perhaps you run out of places to go and things to say?

“Whole Lotta Love Run Riot”, for example : placed at fiftth / halfway in the albums running order, this is the place in an album which is traditionally the strongest non-single track : instead we get a somewhat cheesy, generic instrumental that wouldn't've sounded out of place in a early Nineties rave disco, with a forgettable Andy Bell vocal over the top. Andy has one of the grandest voices in pop, but only when it's used the right way, and in the past decade, Erasure seem to have lost the art of writing classic pop songs. There's nothing wrong with the songs here, but there's little maturity in songwriting or melody shown here – no progression beyond a certain template. It could be that what Erasure do has peaked and reached an apex – that there are no other directions for them to go. After all, Vince Clarke is a genius, but rarely extends beyond his palette (and could you really the difference between an early Mode song, a Yazoo song, and an Erasure instrumental?), and Bell seems to return lyrically to an old well : should a 50 year old man write about going to the disco and techno monophonic sounds? What about the life journey? Or should an artist stay forever in aspic, defined by who they were at 25? And do we really change ever, anyway?

Perhaps for me, it's the sense of life at a crossroads that is worth considering. “Tommorow's World” is another Erasure album – neither a glorious return to form, nor an awful late-term slump, but a solid consistent record of pop songs. Were these songs badged up as the latest X-Factor winner's soaring disco anthem, would anyone notice? Possibly not. On their own, these are all fine strong songs - “Fill Us With Fire”, and lead single “When I Start To Break It All Down” stand up to anything in the recent Erasure canon, but what this record is missing is a sense of need, of urgency. Whilst, with this record, Erasure have produced a strong, solid, dependable record made of pop thrills and jaunty moments, it is ultimately a somewhat hollow experience, lacking perhaps in a centre, but hoping for the same ecstatic moment where we forget everything but who we want to be – and isn't that the purpose of most music? To help us get nearer to who we want to be?
- posted by Mark @ 10:22 pm


Comments:
Wow is he really 50? You have no idea how much that has just freaked me out!