IGGY AND THE STOOGES - "Live In The Hands Of The Fans" 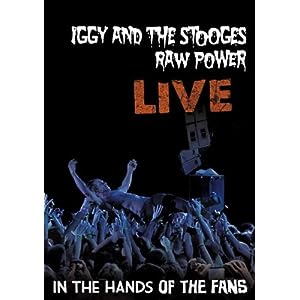 After forty years, Iggy And The Stooges take the 'Raw Power' album out for a spin in the eyes of the world. At the time, “Raw Power” was a silent army, a fierce record that hardly anyone bought. The band went death of glory, and came back without the glory. Its a well known story.

“Raw Power”s reputation baffled me slightly : a great record that suffered from cheap, limp production. A tiger in a cage. And complicated by the multitude of extra songs from the period that were released on a dozen compilations in a million places.

When The Stooges reformed, there was – for some – a confusion that the band weren't doing anything from the “Raw Power” album. That was a different band ; the same, but different. Here, James Williamson, former Vice president of Sony Technical, has returned from retirement to give these songs a new lease of life – “to finish the job”, as he put it. “Live! In The Hands of The Fans” is the first official release from this band.

There's a lot of dodgy bootleg rubbish out there : this isn't it. It's six amateur filmmakers, who happen to be fans with HD cameras, let loose at a Stooges show in Montecello. Unlike your average rock DVD, there isn't a reliance on jump cuts, fancy pans, boom arms, or any of that rubbish. Here we get what it was like to be there. The advantage is that all the footage (with the exception of one camera behind the drumkit) is all shot from the crowd. The minor drawback is that there is little in the ways of closeups or traditional camera angles from the photo pit. But that's a minor fact.

Iggy and the band weld their instruments like machine guns, open the big box of rock riffs, and spring out of the trap as if in a war. James Williamson, who appears to have aged as sleekly as a prime rock athelete, effortlessly twirls his fingers. And the field erupts in a sea as “Raw Power” assaults our ears. And it is glorious. On this disc, Mike Watt barely moves on bass – then again, having a major knee injury and being in some kind of steel leg cast would do that. Rock Action on drums lays down the beat with metronomic, military power.

And these songs have never sounded better : the guitars, drums, bass – all muscular and powerful. Exactly the way these songs have always meant to be. Like the roar I always had in my head.

The first half of the set is mostly Williamson-era material (that is, from “Raw Power” and the associated period). There's “Seek And Destroy”. “Gimme Danger”. A stage invasion at Iggys behest. The snake hipped pensioner that is Iggy wisps on stage, commands the stage, prowls the crowd hungrily, and behind the rest of the band offer a thunderingly heavy, monolithic, hulk of pure raw power. By the second half of the set it's a home run, albeit strange that the band perform the never-officially-released “Cock In My Pocket”. Though “1970”, “I Wanna Be Your Dog”, “No Fun”convince all. Who can argue with this array of weaponry? And, best of all, the stunning song that single handedly launched 80's thrash metal - “I Got A Right”. Often copied – never bettered.

When “Raw Power” comes to a close, its time for The Stooges to tear through the body of work. Sadly, there's nothing from the reformation albums “Skull Ring” or “The Weirdness”, but there's plenty here to sate you, including a song or two from the post-Stooges album “Kill City”. .I would hate for this band to be a touring museum, and would be overjoyed if they added to their legacy with new material and finished versions of the vast legacy of unreleased stuff from their fiercely prolific 1972-74 period. On the other hand, this is a better band than nearly every other on the nostalgia trial, because it is no mere erstasz imitation, but an authentic band fulfilling a promise.

Aside from the strong and intimidating live performance on the disc, the extras are worthy : a 46 minute interview with Iggy, James and Rock Action held by the film-makers, a couple of TV spots, and short pitches from the film-makers. It's a good value, well made package that sits head to head with the best Stooges live stuff there is. This might even be the definitive Stooges live release.

As live acts go, Iggy is rightly considered a god amongst men. He plays harder, faster, and better than bands half his age – and half as alive. How do you follow Iggy And The Stooges? The answer is you don't. They performed with a biting precision few bands ever achieved in their prime, let alone forty years later.Iggy And The Stooges are rock terminators, timeless, ageless, unstoppable – not even death can slay them – they cannot be negotiated with, or bargined with, and will not stop. Ever.
- posted by Mark @ 10:20 pm