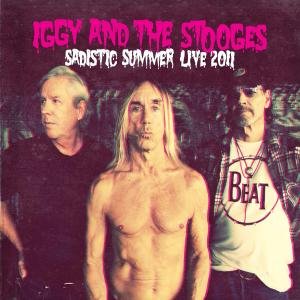 The first official Stooges live record in 7 years, and the first official Stooges live album of the recent 'Raw Power' live shows, this album reflects just what the roar that is The Stooges is. Hard to believe that the average age of this band is past 60. They sound like teenagers in a garage. Only perhaps a sneer of experience within Iggy's vocals betrays that this is an album from a band that is anything over 21. Damn. I wish I'd written songs as good as this by his age.

Rock Action pounds the drums like a human hammer. James guitar bites like a tiger. Steve Mackay adds Sax and slink, and Mike Watts plays bass like he has never been anything other than a Stooge. And it sounds marvellous. Few of these songs are represented on the last Stooges live release - “Telluric Chaos” (which sounds awful), so here we have the official live debut of most of “Raw Power” and the subsequent numerous stray songs such as “Beyond The Law”, and “I Got A Right.”

At a short 60 minutes though, you could wonder why this comes on 2CD's : presumably it was pressed onto CDR's at the venue, and these versions are slightly more elaborate silver, factory pressed CD's – a first for the label. Overall though, given the on-the-fly nature of the recording and the immediacy of the recording, this is a worthy purchase for a Stooges fan and certainly, a very different experience from their other live releases, reflecting the flavour of the Stooges final recorded output alongside a greatest hits precis of “1970”, “I Wanna Be Your Dog”, and “No Fun.” : this is utter rock action, raw power. Get a hit.
- posted by Mark @ 10:03 pm