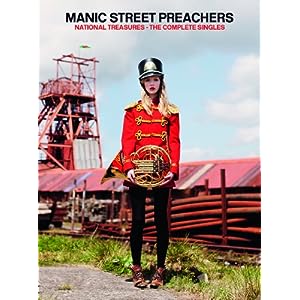 I came to this, originally, with the jaded smile of the grizzled and middle aged man. It wasn't that I changed, as such. It's more that the more I saw of the world, the less I liked it, and the world, wether I wanted it to or not, changed me. Over time, I trusted less. Believed in less. And all we need is something to hold onto.

Other bands may have meant more. But no band ever meant so much. I came to them in 1990, or early 1991. “Snub TV”, or “Rapido”, or the late night ITV 3.30am broadcast “Transmission”. I would set the tape to record by timer. I would watch the 625 lines of video. I would absorb. This music that gave me a world beyond the mundane and inane. The NME was my time machine. My gateway. And there, in the middle of it all, was this. 3 minutes of something. I had no idea exactly what was happening. Four spray painted Welsh punk throwbacks. But dammit. This was mine. Nobody could take this away from me.

And the lyrics. You forget the lyrics. But you never forget the lyrics. They are still in here. Hundreds of lines that shaped my world, and how I see the world. “A morality obdient”. “I don't want to be a man.” “There's nothing nice in my head : the adult world took it all away.” “Gorgeous poverty of created needs”. “Dumb Flag Scum.” “If you stand up like a nail, you will be knocked down.” “I laughed when Lennon got shot.” These shaped my world view. I saw the world though their eyes. Though eyes just like mine. Eyes hungry, and aware, and shut out, dispossessed. I was just little people. At best, then, I hoped for change. I got a job instead. Libraries gave us power. And then work came, and made us free.

Some people don't listen to words. This band was – is – my truth. I connected with these people. Barely older than me, too, living in a town seemingly without much hope. We may have been relatively rich, we had food, and beds. But that is not all a man needs. The Manics grasped this nettle, and squeezed until it stung the life out of complacencey. Even the first handful of single, not featured here, made the pint. “Hospital closures kill more than car bombs ever will.”

And the production? So few people mention how immaculate the Manics have always sounded. The mid point between The Stooges and Queen, the Manics have been – always will – always wanted to be – a perfect rock band. Angry, articulate, political, and above all, keeping the flame of human goodness burning in a world made of liars, losers. “All we love is lonely records”, as I heard it.

But no one person can stay still forever. Pathetic, it would've been, had the Manics remained preserved in a rock amber since 1991. Twenty years without evolution is an artistic grave. They started as the cross, a hybrid between Guns N Roses, and Marx. They ended, perhaps without knowing, as elder statesmen. National Treasures. The name of this album.

A career spanning, twenty year, chronological anthology of the Manics singles. It is an imperfect list : lacking “Suicide Alley” and “New Art Riot”. Lacking, in later years, the “God Save The Manics” EP, the one-off “Christmas Ghost”, the limited edition “Underdogs”, “Umbrella”. By no means complete.

But it holds within it a central thread. A rage against the complacency of modern society. Where shopping is entertainment. Where questions are blashphemy. Each of these 38 songs is an anthem. A progression. A slow movement from one state to another. The album starts with the coiled snake of “Motown Junk”. It ends with “This Is The Day”, the Manics doing The The, middle-aged men playing songs from their childhood. Inbetween The Manics were underdogs and hasbeens, Britain's biggest band and Britains most laughable parody. But these songs. They saved my life. Somewhere else in the world, someone else had read the books I had,. Someone else had gone through their copies of the texts, underlined the words, and decided that yes, that sentence was good enough to go on a record.

Over time, the Manics changed. We all did. They took the focus of the eye, and moved it to themselves. With the disappearance of Richey Edwards – proudly listed as a member on the sleeve - the band became circumspect. They changed. Would anyone have expected them to continue the insane fury of “The Holy Bible”? And survived? Of course not. “Everything Must Go” was, compared to what came next, an unexpected moment. Even if for nothing else that it existed. Let alone be so good. Instead of focusing on the world around them, The Manics became introspective. And rightly so. It changes you, life.

To follow this up with their biggest record, a concept record about depression which brought up a number one about the Spanish Civil War, was some coup. Looked at from a remove, “This Is My Truth Tell Me Yours” is still too long, too stumbling, and, in places, boring (“You're Tender And You're Tired”, “I'm Not Working” were subpar b-sides that somehow landed on the record). But also, this record covered, for me, at the age of 25, the sense of premature awareness of the passing of time, a feeling that has always dogged me, that time is short, that the future is running out, that whatever happens, we are just passengers in the wave of time. The singles from this record were bland, especially the excerably rote song-about-touring “You Stole The Sun From My Heart”.

Having mined this maudlin avenue to the point of near irrelevancy, the next album “Know Your Enemy” saw The Manics, almost, in retreat. After all, how many records can you make? How many statements can you make? How many times before the indian summer cools to the winter of our discontent? The bands touring schedule was truncated to a short six months (compared to the previous 18 month stretches), and the Manics were in danger of looking like yesterdays men. The shock of the new was over. The attempt to reinvent failed, and the band rarely, if ever acknowledge this record ; supported by the release of a greatest hits and accompanying tour that, for the first time, saw them looking back, and sounding for the first time like a band in artistic remission. The videos for this period too, showed the first signs of a lack of vitality. Look. It's three blokes, miming to a song, in a room, shorn of context and with no artistic content. Back then, videos used to mean something. The Manics stopped trying to change the world. Stopped trying to make people think. The videos were blokes singing songs. Not the geometry of contempt bookended with imagery that made one think. To me, this period was the band at their lowest ebb. “Lifeblood” continued the decline artistically. The singles were OK - “The Love Of Richard Nixon” was a strangely political take on New Order's 1985-86 mesh of rock and electronic. But the band had played themselves into a corner. Perhaps the most important element was that the Manics were evolving, always moving, and part of this was coming to terms with what life must be and not what life might be. The world changed the band, not the band that changed the world. By this point, the band had run out of things to say. A natural end point, a natural pause to refresh, rethink, decide if they even wanted to come back at all was the only step now. When art becomes habit, the question must be that is this a bad habit? If art communicates nothing, is it useless?

The return then was “Your Love Alone Is Not Enough”, part of the bands rebirth. Again, though, the video is three men playing a room. How dull. The Manics were in danger of becoming dangerously normal, safe. Lyrics that communicated on the personal, losing touch with the rest of the world around them. Then again, when Maslows Hierarchy of Needs is mostly met, when the realisation dawns that the world most people change in any way is very small, and when the battle, for the reward, is not always worth it, its easy to find your comfort zone. The parent album - “Send Away The Tigers” was by no means bad, but again, how many times does a band say the same things? Thankfully the follow up was “Journal For Plague Lovers”, which contained not one single at all. (The DVD version of this contains the promotional video of “Jackie Collins Existential Question Time”, possibly the strangest title of any record ever).

On this best of, there is then, a leap, and from “Autumnsong”, to three years later, and “It's Not War (Just The End of Love)”. The young punks became parody, the songs were good, but they no longer grabbed your soul by the lapels, and demanded, now, TO BE HEARD. What came next? More of the same.

At the end of this, those, The Manics were in danger of becoming just another band, searching for the thing that made them so great, forever on a journey. 20 years is a long time. It is difficult, artistically, to always remain relevant and vital in 20 years. If anything, this shows how artists evolve, find a kind of peace with what cannot be changed, and how we change over time. These songs are postcards, first from young men, and then from older, wiser (perhaps) old dogs. Time chips at us, makes us different. Many artists hit a vein, and mine it until it is dry forever, before becoming a parody. The Manics were different. They may have made records that sometimes were lacking in the essential fire of creation, or perhaps, became close to being of importance only to themselves, but if nothing else, this record is 2 hours, 20 minutes of songs that saved my life and songs that charted the change from children to parents. The Manics are national treasures. Sometimes I think the world doesn't need them anymore. But when they aren't around, my world will be poorer.