Me Vs. SouthEastern Trains 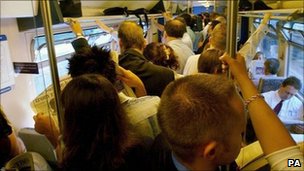 I write in relation to the disgusting, unsanitary toilet conditions that you expose your 'customers' to. The word 'customers' is used incorrectly. A customer has a choice. People taking your trains to work generally don't.

I'm currently on the 5.41 on 13th October 2011. The toilet is out of order. This is the first stop on this services journey – and therefore the train has been judged as fit to run. It is not fit to run.

The day before I was on the 6.41 on 11th October 2011. The toilet was out of order. This is the starting stop of this services journey – and therefore the train has been judged fit to run with an inoperable toilet.

On Thursday 6th October I was on the 7.47am, and there was a pool of water, piss and overflowing shit running all down the carriage.I have no idea if the toilet was out of order, as I wasn't going to get close enough to find out. Since the train had left Ramsgate some 45 minutes previously, I imagine that it had left the depot in this condition.

It is disgusting. It is inhuman. Under EU rules, cattle for slaughter probably cannot travel under such conditions, and they are only fit for death.

If I wasn't paying for tickets, I wouldn't mind so much. You get what you pay for, apparently. But I'm not getting anywhere near enough for what I pay for. And you know it, and don't care.

You might want to remind yourself of the National Conditions Of Carriage, regarding the fit and acceptable running state of the rollingstock. I do not think at any point these state that continually and habitually running rolling stock in unsafe conditions is acceptable. Not only that, but failing to honour these conditions (and those of your franchise to run acceptable quality stock) may deny you the legal authority to run these services, and charge for tickets.

You may also wish to review the terms and conditions of the contract under which SouthEastern were awarded the franchise for operation. I doubt any such contract would contain a clause that stipulates most rolling stock should have locked and inoperable toilet facilities for journeys over two hours in length.

Running such rolling stock presents not only a clear health and safety risk, but is also expensive for SouthEastern : come the Vomit Express late at night, passengers who are undoubtedly intoxicated and need to relieve themselves may not walk up and down the length of a twelve carriage service to relieve their bladder pressures.

Despite what the Transport Secretary says, getting a train is not a “Rich mans plaything.” The only rich men who see trains as “Playthings” are the people who run SouthEastern who use it as a way of extorting enormous amounts of money from the people who actually do the work and keep the South East running. SouthEastern should be ashamed of the disgusting state it operates its stock in.

Whomever inspects and certifies your stock as fit to run is incompetent. Your trains should not be running in this condition. In March, I was on a train that had been running for a month without a working toilet – I complained and didn't even get a response to my phone call. Same in August. (I've put pictures on Twitter. I know, you're so scared). Just keep cashing the ridiculous fares and cream off the profit. Your customers are sitting in rivers of shit and without working toilets, but as long as they keep paying, who cares? They should count themselves lucky they have jobs to commute to.

As a regular commuter, I pay £5,000 a year to your company to provide me with a service. The service is unfit for the price charged and not fit for purpose. And unless I get into a car and drive up to London and back, or walk for 26 hours a day, or cycle for 12 hours a day, I have to get a train. Believe me, if I could find some way to avoid your appalling company I would. Almost all of your livestock, - sorry, I meant to say passengers – feel the same way.

SouthEastern clearly think that instead of investing in your infrastructure, you think it acceptable to strand your passengers in a snowdrift overnight with ravers glowsticks and foil blankets like some surreal horror film. Are you out of your mind? If your passengers freeze to death, the Health & Safety Executive will have you for corporate manslaughter faster than you can say “Gross Negligence.” It's only a matter of time. Still, that profit ratio and balance sheet will keep you safe when passengers start dying and returning home from work at 6am after being stranded on trains in sub zero temperatures for twelve hours. (You may wish to look up the legal definition of “unlawful imprisonment”).

Your staff are also rude and obnoxious : mostly. Very keen to check tickets, demand monies, and threaten passengers, but very reticent to provide anything like a decent quality of service. I saw one of them tell a commuter to “Fuck Off” on the 6.00pm to Ramgsate on September 7th 2011. I'll be complaining about that seperately. Your ticket collectors are almost all rude, inflexible, and authoritarian robots lacking in any customer skills at all. That's beside the point. Shut up, be happy you've got a job, take a glowstick and a blanket, and freeze to death overnight.

The point is I pay you £5,000 a year and almost every train I ever get doesn't have working toilets. I take 440 journeys a year with your company. . And because the law tells you you can, next year that's probably going to rise by £400. I don't get good value out of that. Nobody does but your shareholders. It's blackmail : until I can find a job where I don't have to use your repugnantly incompetent service, I don't have a choice. 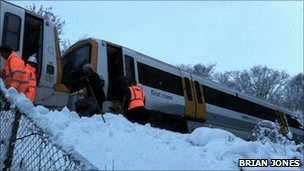 If you think you can justify an 8% fare rise, the only defence you have is a legal forumla. If your only guide is to whether the law will permit it – and if you raise fares by the maximum amount permitted by law every year without fail and without investing in your rolling stock, infrastructure, or working toilets - then your company has no concern or care for anything whatsoever but making a healthy return to the shareholders. I understand companies are not charities. I don't mind a company making a profit. After all, if it doesn't, it goes out of business. But how much profit does SouthEastern have to make? And at what expense?

Every year you put up fares by inflation (5%) plus 3%. Does SouthEastern realise this is actively hurting the local economy? People don't spend money in the local economy – in shops, and on products – because SouthEastern puts the fares up by £500 a year. Every year. And what do we get for that? Do you expect me to go into my boss and say “I want an 8% payrise or you're out of business?” Of course not. He'd contemptously laugh at me. And SouthEastern contemptously treat every single passenger – the people that pay for your continued existence – as prisoners to be abused. Have a glowstick and a foil blanket.

Not only that, but every time you raise fares you are stealing money from the famillies of every person who has to use your service. With most people not getting a pay rise at all, and the NHS getting a three year pay freeze, every time you raise fares, you are making the people of the South-East poorer and poorer, and people will have to cut their standards of living, and stop spending money in the local economy. You are putting the local economy at risk by raising fares. Who cares about that? It's an externality! Let's make some more beautiful profit. MONEY MONEY MONEY.

SHUT UP, BE HAPPY, HAVE A GLOWSTICK!

Here I am sitting in a carriage, with my third journey in three days with no working toilet, overjoyed that I don't have IBS (Irritable Bowel Syndrome), or a health condition, or a baby, because then I'd have to soil myself where I sit because the toilet doesn't work. It's unsanitary, dangerous, and unacceptable. And expensive.

Every conversation I heard between passengers on the 7.17 to Maidstone on Tuesday 11th October was from people who hate SouthEastern. You have a serious PR problem. Nobody likes your firm, or your service, or the prices you charge. Two Sixthformers were moaning about how much it costs to get from Charing to Maidstone. Two relatively well-off commuters were complaining about how much it costs. And how long it takes. And how poor the service is. They are right. Your customers are trapped in an abusive relationship with you. If we had choice, we'd use it and choose someone else.

I could live with a massive fare increase if I got something tangible to demonstrate that I was getting value for money. I'm not. Services are always late. Or don't have working toilets. Or shortformed. Or, to stop fines, don't stop at loads of smaller stations – because it's a race to the destination before the fines kick in – not a service. Doesn't matter about the smaller stations. People shouldn't live in such hick towns anyway. Only losers take the train, anyway. Southeastern gets worse and worse, and the fares go up and up, and the only people that are happy about it are your shareholders.

You cost too much money. Everybody hates you.

And you run far too many trains without working toilets. It is abusive, disgraceful, disgusting, and a risk to public health.

This situation is generating a lot of public unhappiness. Not that you care.

Therefore, I am complaining because if I spend £5,000 a year on something, at the very least, I want it to have working toilets. If not, I am happy to escalate it to the highest level repeatedly and without mercy until you do something about it. Or maybe I should bring my own bucket onto the services, and urinate and excrete into it, then deliver to you at my destination for you to dispose of?

Look on the bright side. Less civilised people would just piss onto the door of a locked toilet, and you are making enormous profits. Who cares about us? We're just chumps. And you? You are hated by everyone who ever uses you : and rightly so. What better way to demonstrate your contempt for us than to charge us £5,000 for not even a toilet?

No doubt you are bored by this latter – but I assure you, no more bored and fed up than every single person who has ever boarded any of your expensive, shortformed, late, and not-stopping-at-every-station trains that stinks of urine and excrement and doesn't have a working toilet, at £5,000 a year.

I suggest Southeastern take remedial action immediately to ensure that all trains that run have a full compliment of working toilets. For the amount of money I – and millions of others pay you – a year, at the very least you can treat you with something other than the clear contempt which you are demonstrating to all of us every day of our commuting lives.

Failure to respond will result in escalation. I am prepared to accept financial compensation for the immense inconvenience your failure to provide rolling stock fit for human use has caused, and reserve the right to refuse if the offer is not acceptable or proportionate. 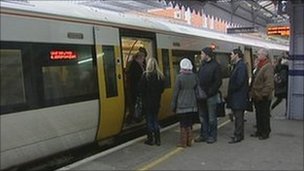