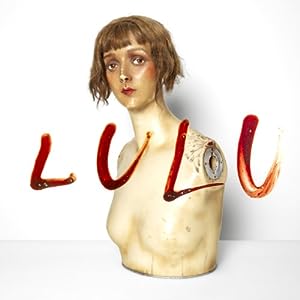 This is forbidden knowledge : something I wish did not exist, and I wish I had not known and can now never forget. Like The Stone Roses live, it is an … experience. Each song on this record – all 87 minutes of its blunt hammer of sexualised pensioner-age pretentiousness – is a dull, po-faced, and tired litany of atonal, self-important rubbish.

Surely at some point someone – now unemployed – should've taken the band to one side and asked a question - “You're serious about THIS? Lou Reed & Metallica do an 87 minute double concept album based upon an unfinished 1895 German opera?”

It's worst record Metallica have ever made. The worst record Lou Reed has ever made, and that's a tall order. The most ill-concieved release I've heard in years.

No doubt they think this is art. It isn't. It's crap. Long, droning, pretentious bullshit with barely a fragment of melody, as Metallica perform largely formless jams. Lou talks utter shit throughout every song in his atonal growl about pumping blood, tables, Jack I beseech you, blood in the tearoom, a colored mans dick, I'm a woman who likes men, a little dog with a puny body and tiny dick, I AM A TABLE : I kid you not. Jesus Lou, why are you so obssessed with penises? I've got one, and mine is awesome. But I'm not talking about it loudly on a globally released, major label album.

This is a man with nothing to say saying it very loudly. If, at the age of 69, the artistic statement you want to make is to translate someone else's vaudeville musical into a bloated late 70's metal concept album, you have no relevance to anyone but yourself anymore. Why can't bands make a concept album, where the concept is to make a good album anymore? Wouldn't the thought of the aging Lou Reed facing mortality, and Metallica, making a record facing the passing of time, been almost bearable? (Almost).

Occasionally fragments of the competently heavy band that Metallica can be come through : when Lou Reed shuts his stupid mouth long enough to let the music breathe, there's some OK Metallica songs here – though each one is a few bars of quite good, promising riffing repeated endlessly. “Mistress Dread” rolls on a fine backing over which, sadly, Reed talks about being a mistress and love, and romance, and blood and sex over it. Every song, near enough, is built on Reed and a droning guitar, cousin of “Metal Machine Music”, and an average Metallica song buried in the mix. Lars Ulrich sounds like he's having a fun time playing these songs. That makes one person in the whole world. The bass appears for one bar in the third song before becoming part of the tedious, swamped whole. Lou Reed sounds as if he's barely tolerating this. Then again, that's Lou's role : to sound utterly bored of everything in the world and the whole of his life is an unbearable affront to his self-appointed sense of dignity.

At times it's the heaviest Lou Reed record of all time. Other times, such as the laughable “Frustration”, where the ancient Lou Reed gravelly intones about licking your thighs, it's embarassing. Grow old with some dignity, Lou. This makes “The Raven” look good. Especially when “Little Dog” is 8 minutes of droning, acoustic guitar, and offkey growls about canine penises.

I wish I were making this up. I do. The next song, and I use the word song only to describe the vaguely structured noise ears can be exposed to has Lou talking about “Dismissable objects that can be fucked with”. And so it goes on, endlessly, until finally it stops and I breathe a sign of relief in my ears. At last, it ends. 19 minutes of “Junior Dad”, and then you're done : since “Junior Dad” is mostly instrumental, its largely the best thing on the record by far, though it rolls at a tedious pace and remind me of the closing track on “Reload”, played at half the speed – and bookended by nine minutes of feedback and strings

At the very least, the band have finally got a half-decent producer in : this is a combination of the finest production and mastering Metallica have had in 14 years (learning the lesson from last decades clattering “St.Anger” and brickwalled,obnoxious and incompetently mastered “Death Magnetic”.), and the worst songs (and singer) they have ever had.

This should have stayed on the pages of The Onion where it undoubtedly came. “Lulu” is easily the worst Metallica album ever made and one of the worst I have heard in my life – it's not a crown any record wants to win. Avoid this.
- posted by Mark @ 7:55 pm