PiL Live At The Isle Of Wight Festival 2011 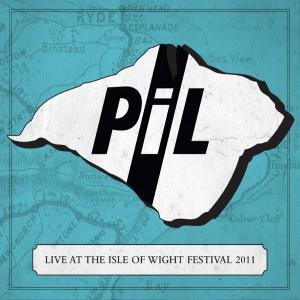 18 months into their continuation – and Public Image Limited issue their second live set : 2009's “AliFe” covered the first few dates of their first tour in seventeen years in a fledgling, tentative reading of some of the material : this covers what is hopefully the end of their nostalgia period. Within this is no song – barring the solo colloboration with Leftfield “Open Up” - less than 22 years old. But what songs.

The lineup offers little in the way of continuity with the pervious PiL eras, being most of the band that toured 1986's “album” and made 1987's under-rated (and expensive, long deleted) “Happy?”, alongside permanent alumni and visionary John Lydon. The production, and sound of the band, as well as the performance is tight, immaculate : possibly the best band Lydon has ever worked with – as songs such as “Open Up” become so much more than a three minute electro romp and become, definitively, a PiL classic. The guitars are precise, the playing is note-perfect, but spirited. This may not be the nostalgic vision of PiL many of the purists want, but it is a band that lives and breathes the songs and performs them with a commitment.

On this set mind you, PiL offer a clearly warts-and-all performance : the band are plagued with tehcnical problems in “Religion”, and “Home”. “Home” stumbles and falls to pieces before our ears as Lydon berates the clearly wayward sound and the band – unable to hear each other – struggle before capitulating to the elements. Gremlins are fixed by the fouth song, “Albatross” and the band pull out a strong, and worthy set. “Death Disco” is possibly the best version I've heard, and “Warrior” is, as always a fierce statement of disco intent

And only 80 minutes and 18 seconds though, you could wonder why this comes on 2CD's : presumably it was pressed onto CDR's at the venue, and these versions are slightly more elaborate silver, factory pressed CD's – a first for the label. Overall though, given the on-the-fly nature of the recording and the immediacy of the recording, this is a worthy purchase for the PiL fan and certainly, a very different experience from their other live releases.
- posted by Mark @ 10:06 pm