POP WILL EAT ITSELF "new noise designed by a sadist" 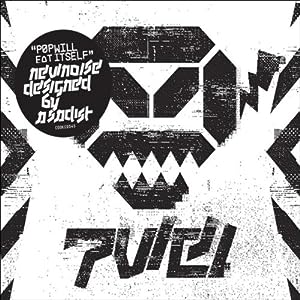 25 years after their formation, 7 years since the inevitable, shortlived, and glorious reformation, Pop Will Eat Itself – or a band called PopWill Eat Itself – release their first album of new material in 17 years. But is it Pop Will Eat Itself? Well, yes, and no. Of the band you may have known and loved from way back when, only one member – Graham Crabb – is here. VileEvils, the band formed by Graham, Fuzz, and Adam after the reformed PWEI collapsed, were 60% PWEI. This Pop Will Eat Itself is only 20% old PWEI. And before anyone gets too far into mathematics, so much of the PWEI personality is here, and also, so much is utterly absent.

Pop Will Eat Itself weren't just a name : they were a band. Five friends who went to the same pubs, saw the same bands, walked down the streets together. This? It's a calculated attempt to use a popular brand name to sell records and tickets using the name of another band and playing other people's songs live, taken by one singer. The final 1995-96 era lineup of the band contains not a single person who is in this lineup or on this record. To all intents and purposes, it's one-fifth of the band recording a solo album and putting it out under a band name. Much like, say, Peter Hook forming a new band called NewOrder, and not discussing it with anyone else in that band : at least one member of the former PWEI found out through the press release. And this sounds far from the sonic furrows the band were exploring on their previous studio records : the irreverent humour, and the sense of sheer crazed joy that comes from using and abusing a wall of noise, all absent in a dense, and roaring selection of angry but directionless songs. The particular guitar tones, open drum barks, the fluid bass and well-placed sonic textures that made Pop Will Eat Itself much better than some of the competition have gone away, Mrs Torrance. It's not Pop Will Eat Itself, but PWEI V2.0, PWEI-2011, a variant on Classic Coke with new, unfamiliar ingredients in an old can. Boys wil be boys, and play in a punk rock band. And, as a result, it still sounds like Pop Will Eat Itself : but not the way you remember them. A good band, a good record, but not awash with the classic sounds or songs you will be pining to hear in a setlist.

Not all of these songs will be new to the trained ear : “Nosebleeder Turbo”, “Oldskool Cool”, “Wasted”, “Seek & Destroy”,”Mask” and “Equal Zero (RetroDreaming)” have all been recorded by VileEvils, and have been re-recorded and remixed from their unreleased album : not only that, but some of the finer songs - “Council Housed And Violent”, “Demon”, “RetroDreaming” are also lost in action : and they are certainly stronger than some of the material on here . There's plenty of strong material, designed for jumping up and down in British clubs and at gigs, and some fine versions here : but they sound like a dour continuation of the bands 1994 album ; not anything new, nor exciting, nor worth a 17 year wait. The spark, the need to go back and hear this great record again, RIGHT NOW, is gone. Not because of time, or our changing lives, but because this band isn't as good, and the songs not equal to the work of the past. This is a good band, a good record, but it's not Pop Will Eat Itself. Its looks like PWEI, quacks like PWEI, but look closely and it's a great tribute, a more than passable imitation : but not the real thing. On the other hand, judged on just its own merits, its a strong and enjoyable record that has many glorious moments : but its not the band you remember. It's a new millenia, a new music, a new noise – go into it expecting the same but different, and you may just enjoy it. It's Pop Will Eat Itself, but not as you know them.
- posted by Mark @ 11:04 pm