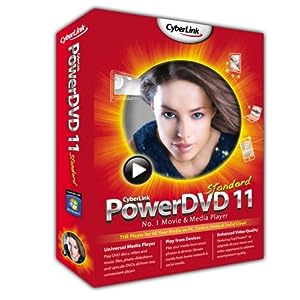 I'd love to review this product for you. It always baffles me when manufacturers fail to put suitable DVD player software in their machinery - and my Toshiba system has a baffling setting where the inbuilt software can only render if you use Microsoft Aero set to a certain resolution which is frankly ridiculous. I've been working with a desktop configuration that has prevailed for about 20 years, so when I buy a new machine I customise the look and feel to a mechanism that I grew to understand half my life ago. (Under this setting, the Toshiba inbuilt DVD player cannot work, which frankly, is Toshiba's shortcoming - not mine).

The installation process is somewhat labourious, insomuch as the installation for me stalled at a certain point unless I clicked on a popunder which appeared invisibly and unexpectedly - and unnoticed for half an hour or so. Eventually I realised that it wasn't just a moribund piece of installation and a design flaw, I finally opened the secret tab, clicked accept to "Moovie Live!" (which is both illiterately titled and has a juvenile logo), and lo and behold my

Tabbing between options and using the application whilst the disc is playing is a ... less than optimum experience. Redraw and rerender times are boring when half the screen becomes a silent grey blob for long periods of time - I wasn't running any other applications aside from this review, and it became unresponsive. The design of the playing screen is unnecessarily busy - occupying a large portion of the visual footprint with huge tabs and buttons - why not a 'light touch' option that offers minimal, transparent buttons on the played media. When I clicked the "Video" Tab unintentionally it stopped what I was watching, grey screened, and then I had to reload the disc to return to what I was originally doing. Ctrl+Alt+Z my life. The disc eventually was offered a "resume" option, but got caught in a loop and didn't play, before returning to the main menu and whitescreening for three minutes. The dealbreaker for me on this frankly useless software was that the playing area could not be shrunk on the device screen to any less than approximately 60% of the total screen size. My normal use for a DVD player on a PC is to create a small screen probably occupying 10% of the total screen size whilst I perform other operations - such as writing this accurate but unfortunate review - and one where all the useless tabs, buttons, and options you don't need when just playing back are minimised. I'm sure when you look under the hood of this programme that it is marvellous and can make buttered toast and herd cats, but as it is, it seems a vital part of the programme - the graphic user interface - has been crucially missed out of the design process and replaced with an intrusive set of crude and thoughtless emphera. A potentially stunning product let down by a tiny, but crucial failure in understanding the difference between what this product can do, and what it should do. Products are only as useful as the uses they are given by their users, and this is a very expensive box for me to put on the shelf. If I had paid for it I'd be expecting a refund.
- posted by Mark @ 9:33 pm