WATERBOYS "An Appointment With Mr Yeats" 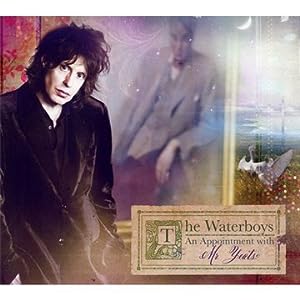 Permanently resurrected it seems, the ever changing Waterboys, the visionary Mike Scott accompanied by whomever is in the room with him at the time, bring their vision to a long-discussed set of Yeats poetry. Scott's usual lyrical bent is still here, in the most obvious way – and aside from the twist of language to using archaic and obselete words that have fallen out of popular use – there is little to indicate this is anything other than a full, complete record of original Waterboys material. Put it on, and it sounds the same, a complete continuation fo the journey, to who knows where.

These songs are, to all intents and purposes, Waterboys songs with a different lyricist – not that you would necessarily notice. The familiar themes Scott has been mining the past thirty years (can it be so long?) are here – the earth, the moon, spirits and visions – and the currency of the work is the same as before ; the palette of instruments, the wayfarer seeking a truth, though “Politics” walks in the footsteps of a cheap Casio horn synth, and “An Airman Forsees His Own Death” veers closely to the same kind of histrionics you get in the hands of the shrivelled Whitney Houston at her nadir. Pathos, when that alone is the aim, is meaningless without a valid context.

“Her limbs are delicate as an eyelid – love has blinded him” he sings in the frankly ridiculous 'News From The Delphic Oracle', as if passing on the secrets of life – in one of the albums slight missteps, a incongruous and affected piece that sounds like something shorn from a dreadful musical that set my Pretentious-O-meter to Danger : aside from this, the vast majority of the songs are worthy additions to the late Waterboys canon – taking the line from “Universal Hall” and “The Book Of Lightning”. With a few minor dead ends into oompah oompah and whimsy, “An Appointment With Yeats” is a another statement, a new vision thing, from the searching spirit. Lacking in the urgent and unstoppable, infinite quest that characterised The Big Music, but still a wandering the earth of now and then, looking for some kind of answer.
- posted by Mark @ 7:47 pm