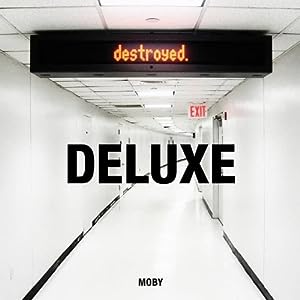 The Moby battleplan is becoming obvious. Release a bare bones album, and five months later, a superdeluxe edition with a live DVD, documentaries, loads of videos, and a a whole album of new music. Which makes me wonder why I should ever bother buying the first release, because five months later I buy it again. (In fact, I'm not buying the first release for any other purpose but to listen to the contents for a few months before the superduper version comes out).

"Destroyed" itself is yet another Moby record. A sort of sad, electronica Neil Young, Moby puts out a new record every two years or so, tours frequently, and now mines a fairly refined template : in the DVD that comes with this expanded version, the secret is out - these are often songs written and recorded in the middle of the night in hotel rooms across the world. "Destroyed" is another solid Moby album, much like the previous twelvty or so he has put out. A record with a handful of upbeat disco material, then moving to a more considered, reflective late night comedown. The template, and his sound, has barely moved in a decade since "Play".

With the death of the physical single as all but a fetish object has made this release the only way to obtain the extra songs we used to call b-sides. Here, on the second CD, are eleven songs from the thousands Moby has recorded over the years, mostly unheard - there's also a beautiful orchestral version of "The Day" (and alternate mixes of "Lie Down In Darkness", and "The Broken Places"). On the other hand, some of these new songs do outstay their welcome. "Washing" is at least two minutes too long, riding as it does on sparse instrumentation that becomes well, as boring as washing itself. It is, in effect an album in itself ; not a release made of the often ill-thought padding-for-the-sake-of-padding of dull and tedious remixes

The Amazon version of this package is the one to get : it contains an Amazon-only live recording on an audio CD shrinkwrapped to the package that contains an hour of live Moby recorded in at the iTunes Festival in London. The live material shows the individual recordings that make up the parent album in a new light, being the sound of living, breathing human beings jumping up and down and playing. The songs are the same, but livelier, brighter, and a refreshing change from the occasionally sterile studio versions in an effective greatest hits set. It rankles that the performance was only for competition winners, but that's part of the inherently elitest nature of it all. On the other hand, there's 14 live songs and over an hour of music, so it's no opportunistic flimsy bonus, but a worthy and enjoyable live release.

The DVD is a good value for money package : however the live material is frustratingly short - only 26 minutes recorded live in France. There's a short acoustic session, and the rest of the set is bolstered by videos / short films for half the album and alternate versions of other songs to around 17 or 18 videos. There's also a 20 minute interview, and behind the scenes footage. There's little weighty to wrap your teeth around, but there's plenty here to nibble on. The Interview meanwhile, is useful, showing the literary allusions that Moby has used for his song titles, and exploring a perhaps generally unseen depth to some of the material.

Overall, this is a worthwhile and value-for-money package. The DVD comes to around 3 hours in all, the album itself - and the second deluxe CD - add to around two hours of music, and the Amazon-only live set make that a further hour, so, for around £12, this is a great value binge of new Moby music. Let your ears invest in this.
- posted by Mark @ 10:13 pm