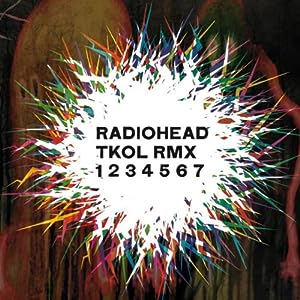 On the embers of the underwhelming, determindedly uncommercial “The King Of Limbs”, Radiohead venture to the remix album. From a slender 34 minute record, this is nearly four times the length of the original, and an unessential addition to the canon. Compiling the multiple remix 12”s released to please the trainspotters, the remixes here follow the avenue of experimental – in so much as they jettison the concept of listenability – without necessarily being anything other a tedious diversion.

The old world of the remix was to pay another artist to warp your song : either to pad out numerous multi-formatted singles, create a few quick b-sides, make an OK song a hit, or to extend the lifespan of a song or album. Here, it's presumably to drag out a slender album into something else. Smaller artists – the kind of estoteric creators that often count few amongst their patrons – are endorsed by the big names, and given a leg up. Really though, with the 'remix' as is, these days, being so far removed, they are often independent pieces of work, interpretations, repaintings, reboots, cover versions, with fragments of the originals one. The Mark Pritchard mix of “Bloom” contains barely anything more than a distorted vocal of the original : the Harmonic 313 mix is a shimmering instrumental with only a shadow of the parent song. Perhaps the remixers have different ways of looking at these works. For me, the finest remixer creates material does the best of their abilities and vision on the grounds of the original. Sometimes though, the best remixes are nothing to do with the originals.

If you are expecting something that expands upon the parent album, or enhances it, you will be lost here. The fine non-album songs ; including “Supercollider/The Butcher”, are absent. Some of the mixes are memorable, worthy – but none unforgettable : Does the world need 5 remixes of “Bloom”? 3 of “Morning Mr Magpie”.? The whole album is presented here in a revised form, but one that bears no relation to Radiohead anymore. Slender portions of Yorkian vocals come in and disappear, occasional sound effects and twangs from the instrumentation ghostly rear their presence then are gone. The nearest, most recognisable one if Four Tets version of “Seperator”, retaining the seperated, art-for-arts-sake air of the original. But over this exhaustive two hour excursion, there's little sense of a thread or a join : just a bunch of unconnected tracks, sharing little but Thom's vocals and a vague sense of atmospheric unease. It's nothing more than a curio, a mild distraction. The record fades out with no sense of a journey or a result, just an end. Next stop doesn't matter.
- posted by Mark @ 11:05 pm