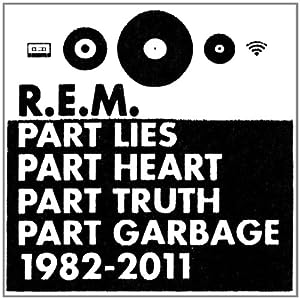 The cover art says it all : cassette, 7”, 12”, compact disc, then Wi-Fi. How we consume, eat, enjoy music may have changed, but two things are the same : all music is made by people, and all music is absorbed by people through their ears and minds. Part Truth, Part Lies, Part Heart, Part Garbage is the summary of a life, an existence told through music, charting life under Reagan, Bush, Clinton, Bush, Obama. From youth, to adulthood, to the close.

As it comes to an end, so the epitah. Unlike many bands, the undignified holding on endlessly, R.E.M mark their demise not with a whimper, but a bang. So many bands demean themselves : not knowing when to leave, outstaying their welcome, or perhaps mistaking saying something with having something to say. But if you don't need to do something, and you don't want to, or don't enjoy it, then why would you? To please others? Surely there is a time where each of us look at our lives, and think “Enough”. No more of being subject to certain people, or circumstances. No more of being tied to people, or to places, or to jobs we no longer love or get enough from. After all, spending our whole lives with the aim of happiness, you either change to meet the world, or change the world to meet you.

And with this, R.E.M abdicate, of a sort. With a new set of top brass at the head of the Warner Bros. Tree, the pressure must have been to try and co-erce good old R.E.M, having been around a while – a sort of credible Bon Jovi – into climbing the old circuit of album/tour/interview to sell records and provide a cash injection to the dinosaur whilst the rest of the world goes around downloading the stuff for free. How many times have you been around the world? What new is there to see after being round the world three times in five years? What is the point of getting up early, sleeping less, travelling more? How many millions of miles has the band spent in meatspace, moving from Stadium A to TV Studio B to Interview C to Stadium D for half their lives? What new do you get from headlining Hyde Park, or Madison Square Garden for the 14th time? If you aren't getting enough out of it to make it worthwhile then why do this at all? So here it is. No big splits, no major arguments. Just not enough reasons to keep doing it again and again and again. R.E.M have nothing to prove to anyone after thirty years and fifteen records and over 276 songs and several hundred shows.

Never again will R.E.M. Be seen, surrounded by neon lights, in Arenas and Theatres. Bringing songs new and old. Taken for granted. Lost sometimes in habit, endlessly repeating themselves in new ways of performing the same old tricks. Yes. R.E.M made that mistake in 2004, with the maudlin, mogadon, and now rightly unloved Around The Sun. And they fixed that lack of focus with the final two records of their life. Being at a certain age, in their forties, we change, as they did, and came to a way of thinking. Why does this if you don't believe it? If you cannot give your all to your art, then do something else? How can it mean anything to the audience if it means little to the creator? And here, this is where R.E.M were at the creative epicentre, with Around The Sun and with a record in need of editing and excitement. R.E.M came back from that with a vibrant, indian summer that became their grand finale. It started with promise, dulled to complacency, and then, before a terminal decline became irreversable, left exit smiling. It was writ large in “Collapse Into Now.” The first record with them on the cover, Stipe waving goodbye. In “All The Best”, Stipe explaining obtusely that maybe time was out.

It was glorious. And now it is over. Now a memory. In a beat they went from a band that might be holding on to the bitter end beyond their time, a band that perhaps left at just the right time : just long enough, with the knowledge of a strong and imperfect but worthy set of statements behind them. Clearly on here, perhaps is the thought of R.E.M. As three bands, all with the same name, the same core members, but seperate phases of their lives. The first captured in the first third of this, runs from roughly 1980-1987, which saw R.E.M. As an angular, embroyonic band, growing into themselves, into some form of maturity, experimenting, trying new worlds and new approaches, becoming themselves. Working with a form of words and sound to be a band both in the footsteps of their influences (certain bands styles are writ large over the earlier songs), and also, at the same time, absolutely themselves. These early songs, starting with “Gardening At Night”, were a band that became legendary and, had they scattered like leaves twenty five years ago, would be feted, legendary, and the best cult band of their decade. They dared to continue. Beyond the confines of angular, obtuse, but also strangely direct and human. The first third of this collection, from 1981 to shows the bands as they were on IRS, moving to a greatness, and, then, moving beyond.Songs such as “So. Central Rain”, “Fall On Me” and “The One I Love”, wether they sold 20 copies or 20,000,000 are still songs that it is hard not to love.

The second, best known, is the band R.E.M were from 1989-1997 : enormous rock behemoths aiming for an intimacy even in the biggest setting, a band that became huge despite themselves : they saw the precipe of acceptance, and just made great records which resonated with the public. Like a Velvet Underground that stayed together and became huge, for example. Starting with “Orange Crush” and “Stand”, the band settled on their second phase, a more understated, and nuanced act, with material that shows both human fraility and beauty. And, in the shape of the sorely under-rated “Monster”, decided to subvert the form of their art. The five records this period covers – from “Green” to “New Adventures In Hi Fi” were R.E.M at their most precise and accurate ; where ability and vision met perfectly. Before complacency, and the limitations of the format of rock had been fully explored, varying from the whimsy of “Man On The Moon” and stark “Losing My Religion” to the incongrous “Electrolite” (which came at the same time as Oasis ruled the world, chalk and cheese). R.E.M were never afraid to show themselves for who they were, demonstrate their depth or their weakness. Showing weakness is a form of strength. Hard to believe now, but then REM were as big as U2 and better at it as well.

Finally, from 1998 to 2011, saw R.E.M in a slow but defiant decline : Bill Berry had retired, and thus, the trio of remaining members continued, exploring the worlds of electronica, programmed sounds, and songs not propelled by rhythm. Here, perhaps, the debate is most obvious : the tracklisting sometimes fails to make much sense to met. Wither “Daysleeper”? “Tongue”? “Strange Currencies”? “Lotus”? “All the Way To Reno”? With this section R.E.M prove that, whilst they may not have been universally loved by all or accessable to many, they still strived to reach The Great Beyond and make new music that explored new areas. Even if those areas may have not always resonated with much of the public. But aside from the “Automatic Alligator Antimatter Autopilot” which still holds the mantle of worst REM song title ever, it's solid, and to the end, still striving to be inventive. The album ends with three new songs, including the pointed title “We All Go Back To Where We Belong” which rounds the collection in a circle.

If money was all that interested them, if furthering the brand and the logo and selling it on waffles in stadiums were their aim, R.E.M could – and for a while, did – very successfully, make this a job and a business. Naturally there are cries of, and demands for, the farewell tour, but would you spend a year doing something you no longer wanted to to please someone else for their transient memory? … and should you, if you don't have to? Ultimately R.E.M's dismantlement is the last chapter in their integrity : to leave on their own terms, head held high, knowing that even the last act was true to their own tune. And that was probably why they meant so much to so many for so long.