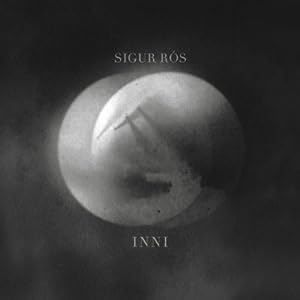 Another end this week as well, in the same week in November 2008, both Sigur Ros (for now) and R.E.M (for ever) ended their live careers, and this - “Inni” - named, probably, after the prevelant type of belly button in homo sapiens – is a fitting end. There are words people use to describe this band : words such as glacial and majestic, and ethereal. Words used by critics listening with their heads, not their hearts.

A sequel of sorts to 2006's live “Heima” set, which was a live record made, mostly, without an audience in sparse Icelandic landscapes, this is a different type of live release : the way most people would have experienced Sigur Ros live would have been this way : in large, quiet buildings, set in a spell, as conventional instruments made glorious summer in our ears. But these songs. Similar bands have done similar things, but few have ever achieved what these men did : a soundtrack for the internal meditation. When I listen to this music, I, you, cease to exist, and the whole of the universe becomes a unifed incoherent, beautiful whole. The music helps me think, lets my mind wander. The nearest comparison to the effect Sigur Ros have to me is the same experience when I saw most of Pink Floyd perform “Echoes” at the Albert Hall : where the mind goes to somewhere else, and I explore innerspace with this music as my guide.

It starts with a soft pulse, a gentle tone of precise feedback, a build to : the sound that makes the closing moments of some of the more experimental songs by huge bands is their raison d'etre. The use of layering, timing, and an unhurried reach to the material is how Sigur Ros present this. We have all the time in the world. Deadlines do not really exist in any tangible way anymore. “Glosoli” is the nearest thing to anything real, as it sounds as if the song is being played on a crackling vinyl disc – quite how that can be achieved with instruments baffles me. At the heart of it, the songs shows that the band understand the conventional rock dynamic as much as anyone else, and with clarity, choose to follow their own template instead. The audience claps at certain points, but the editing is judicious, the noise never interrupts into the experience, the spell of sound.

Over 2 discs and a concert DVD/Blu Ray, the enormous Sigur Ros experience, as best as it can be experienced without standing there, is conveyed – four men working hard to tease out of their instruments strange and unusual sounds, with songs made of dynamics that go far beyond the conventional 4/4 rock of verse/chorus/verse into something else, where, like the greatest art the music exists as a gateway to another way of thinking. On the film, audience shots are minimal, for this is not a performance, or showmanship, but a presentation, a creation of a certain atmosphere. And, as such, “Inni” is a success, in evoking an emotion, a feeling. For art without meaning is nothing, and for this, perhaps, it's success comes in the ability to evoke in the audience something, even if that something is intangible, untouchable, and different for each of us.
- posted by Mark @ 9:24 pm