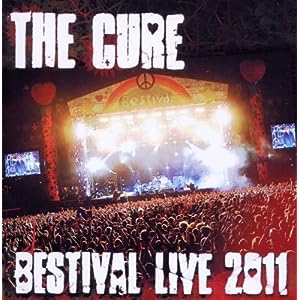 Being the first Cure live album in nineteen years, there are inevitable cries of rip-off, despite it being very competitively priced - and two and a half hours long. And like the last two Cure live albums, with artist royalties going to charity.

It's also the first Cure live album shorn of the usual rota of album-tour-album, capturing a one-off outdoor show three years after their last studio record, and also, the first that covers in its entirity one of the (rightfully legendary) epic concerts that have made the bands name. Other live records have been promoting a specific album, loaded with material from the then-recent release, and missing huge chunks of the evening. This is the first live album that features songs from their entire body of work, instead of promoting one specific album. And it is a glorious romp through the thirty year history.

Is this The Cure? For this album the band front yet another lineup (their fourteenth in thirty years), and also it is this configurations first public appearance. And yet it is unquestionably The Cure. Simon Gallup on bass has 30 years in the band, Roger O Donnell first played with them in 1987, and Jason Cooper joined on drums since 1994. It is not merely a case of Scary Bob and Some Blokes, but an fluid identity presenting one of the richest back catalogues there is.

From the opening “Plainsong” to the final “Killing Another” (using the slightly revised lyrics Robert has been singing since 2001), it is wonderful stuff. A journey through the bands entire canon, with many songs – such as the fun mini-set of 1979 era material at the shows climax – that have never been officially released on a live record. Given that this is the first time The Cure have played outside of the twin guitar line up since 1982, the sound – especially on some of the heavier songs such as the triple-guitar “Open” - can be a little sparse. The production is open, lacking the dense soundscapes and textures that have been the bands trademark for thirty years, with a wider, more spacious sound. There are elements where O'Donnell ably recreates guitar textures with his keyboards (“Fascination Street”, and later “The Only One”, for example), but what is missing is the bite of duelling guitars. Gallup and Cooper meanwhile, having played together for 17 years, lock into a rhythm of near telepathic sense and (seemingly effortlessly) dispatch the songs with a warmth, almost unthinking precision.

But then the songs start. The band tell a story throughout these songs, opening with a bleakness, moving to an overall optimisim, before the inevitable heartbreak. With the exception of the under-rated “Bloodflowers”, and 1996's “Wild Mood Swings”, every album is represented here, ending in the explosive trio of misery that is “One Hundred Years” / “End” / “Disintegration”.

Then it's encore time, with a flurry : the first encore is a short greatest hits of songs the band play on good days - “Why Can't I Be You?”, “Lets Go To Bed”, “Caterpillar”, Lullaby”, “Lovecats”, “Hot Hot Hot!”, “Close To Me”. The Cure are unfairly derided as goth, when really they are just a clever, multi-facted pop band that do happy and sad.

This is why I love music. It unlocks in me the emotions that are often too hard, too raw, to process any other way. How can one know joy without it's opposite? Love, without anger? You wouldn't be a human being, but a one-dimensional game show host.

The brief pop thrill that The Cure became is visible again, and the fans that grew up on these songs and became bank managers and housewives rise as one and dance a little bit. Two hours and twenty minutes of music since the opening chimes of “Plainsong” and the band are rampaging through “Killing Another” as if it were the last song they will ever sing.

As “Grinding Halt” powers through, I'm reminded of Robert Smith saying that it was so long since he wrote those songs, and the band has changed so much, that they are practically cover versions with Smith being the only constant through the band's existence. But it doesn't sound it. Even though many of the band may not have been on the studio recordings made before Thatcher came to power and when there was only one “Star Wars” film, this band have inhabited these songs for so long now, they own the songs in a way the original lineup never did. Time, whether we know it or not, is running out, the end is nearer than the beginning. Not that this necessarily matters. This, here and now, living through history, and captured for your ears for ever.