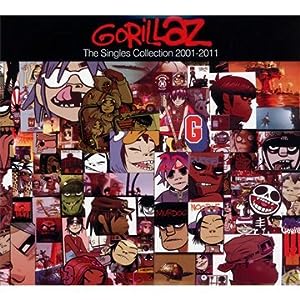 Ten years - eleven actually - after Damon Albarn's joke band stumbled forth, and somehow, they are still doggedly selling records, playing out big places, and with this, releasing greatest hits. But whats to get? Gorillaz aren't a band, but a piece of shallow, mostly meaningless egostroking for Damon to exercise his brain and stave off the kind of boredom that comes with financial security. Couldn't he grow cheeses instead? The idea of a grown man capable of great work felt-tipping his teeth black and pretending to be a cartoon sixteen year old is more absurd that Michael Douglas still having sex appeal in Hollywood blockbusters.

Oh, I forgot. It's the music, isn't it. That's what we are all apparently bothered about. (Are we?) This, being either a celebration of the first ten years, or the bookend funeral of Gorillaz, whatever it is. It opens with music : on the face of it, a direction you probably wouldn't have seen hinted at in the slightest in Albarn's Blurworld. In the past ten years, Albarn's frantic reinvention has diluted his name and his brand. Not content with making it big in Blur, and making the best record of his life - "13" - Albarn ripped it all up and threw it away. For what?

For the safe, unemotional, rote gibberish of "Gorillaz", sure this is 'good' music that if what you want is entertainment. If what you want is not music of power and force, but music for chilling ouit in the car and for the iPhone and for walking down the street. It is lacking in the essential status of necessity : you can take, or leave, this music, live as you will. Sure, there's hits, there's memorable tunes - "Dare", "Stylo" and "Clint Eastwood" are quite good, entertaining even - but there's no compulsion to listen again. And the music is, shorn of the angular guitars and underplayed keys of his other bands becomes, well, a bit of a amorphous mass. On the other hand, if you really do believe that this is the work of anything other than a bored rich man, playing with his toys, surrounded by hired hands and his mates - yes men, all - going along with his muse and his ruse. They may very well believe this, and enjoy it, but just does not provide the things I would expect from the music I love. It's just pop : disposable, meaningless, shallow : and in it, shards of beauty can sometimes be seen. But that isn't enough for these ears.
- posted by Mark @ 4:28 pm