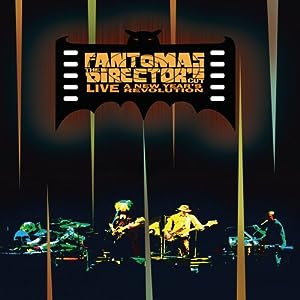 Fantomas are perhaps one of the finest bands most people have never heard of. Their strange and wonderful combination of ambient nose and jazz-thrash metal is about as commercial a prospect as cyanide pie. To me, however, and hopefully you, this music – largely shorn of chorus, discernible structure, or lyrics, is a manna from an angry heaven. Filmed one New Years Eve, Mike Patton – the voice of Faith No More, Mr Bungle, Tomahawk, Peeping Tom, and many others – leads this unholy quartet (with members of Mr Bungle, Mudhoney, and Melvins in his racous orchestra) through the entirity of their unsurpassed 2001 masterpiece “The Directors Cut”. For many, this band were a bag of rubbish. But this album, 13 themes from classic cinema recast and covered with a respectful irreverance, is one of the finest records I have ever heard.

The performance is immaculate and finely honed - it is, amongst all other things, a unit that cohesively glues together seemingly disparate influences to form a whole that is much more than the sum of the parts. And, given that the album they are performing in full explores the world of cinema, the visuals are bizarre. Taking a cue from the classic tricks of old, don't expect a fimmaculate Blu Ray presentation of a show at your local enormodrome. This mixes footages from phones, cameras, and treated formats, combined with a dded grain, distorted, and playfully applied visual tricks including blurred moments, ghosting, static cross fades, fake VHS interference, painted on glowing red devil eyes, and anything else you can think of treating the visual images as moving palette of experiments.

Then again, if you made it to the third paragraph of this review, you'll know Fantomas aren't exactly Linkin Park for the middleaged. You should expect more than the usual run-of-the-mill singer-points-and-everyone-goes-whoo experience you will get with your latest Madonna live DVD. Besides, it's not as if there is a giant robot about to emerge from backstage, or anything like that for your delection. Just four men (one in a hat) with a cacophony of noise for you to experience. If anything, there is little music in the world that requires such rapt attention, as tempos rise and fall, music becomes a form to used, abused, and left for dead. Opening with “The Godfather”, the set for me, peaks with the totally fucking bugnuts 2-minute race through Jerry Goldsmith's theme “The Omen” - during which Satan Worship has never seemed quite so appealing. The drummer is a frantic blur of limbs. Throughout the 70 minutes, the band roar and dip and play ; in the truest sense of the word, play – with the music with a sense of amusement and outlandish quirky whimsy with whistles, theremins, and grinding guitars wormed into an experience I can best described as the musical equivalent of extreme sex. As Maybe it's something you had to be there for, or something you had to feel in your guit at an insane volume in a crowded room. Fantomas are, like everything these musicians has been involved in, a labour of love, where music is made more with the idea of the glory of the noise instead of any eye towards key issues. Who cares how many copies it sells? Who cares about many tickets? As long as you don't have to do a day job as well, a musician can make music, for that is what he does and where his instinct takes him – often at the cost and sacrifice of pension schemes, medical insurance, or an affluent life, but with a richness far beyond that of any bank balance. A glorious continuation of the muse, and the music.
- posted by Mark @ 9:40 pm