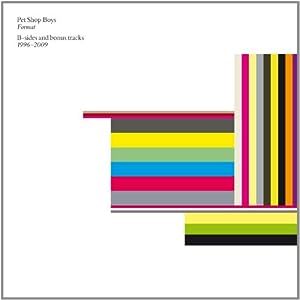 The sequel, of sorts, to 1995's “Alternative”, “Format” is best seen as perhaps part of a very much a dying breed : The B-sides album. Over their quarter century (is it that long? It doesn't seem so, but it obviously is), the Pet Shop Boys have seen the dominance of the format, the plushing of the vinyl single, the rise, and hasty death of cassette, and the entire lifespan of the CD single : “Always On My Mind” was the first Number One Christmas single available on CD in the UK.

38 songs at a very affordable price in a double set : near enough every Pet Shop Boys song that hasn't been on an album. Near enough.

Now, the b-side is an anarchronism : there are no b-sides anymore. Physical singles are practically extinct : HMV in Oxford Street – the biggest record shop in Europe – contains a two feet of rack space for the CD single. Everything is available on your virtual storefront.

Taking perhaps a strange role then, this record, or box set, of something like 40 songs is a lavish, exhaustive two and a half journey through Pet Shop Boys back pages. Running from 1996 to 2009, from the bands out-of-time “Bilingual” to the largely successful commercial reappraisal of “Yes”, , “Format” is, by definition incomplete – missing the b-sides to the last three singles – and doing what most b-side albums do, which is sound exactly like a collection of songs that don't quite fit well together recorded many years apart.

To their credit, the Pet Shop Boys still bother with b-sides. For many bands, the b-side is now nothing more than a digital bundle of extra leftovers pared off and thrown randomly across the internet through several retailer-only exclusives, or perhaps, even worse, akin to the Depeche Mode remix record from the summer, where 25 extra remixes were only available from 7 seperate digital sellers.

For this band – Britains best songwriting duo – there is no such as a b-side, just a song that doesn't make it onto the album. And here they are. Keen listeners will know first few songs from the 2001 remaster set of “Bilingual”, with others from the various limited double-disc formats of the albums at the time of their release. Others – such as “The former enfant terrible” have only ever been seen as downloads. Not that this necessarily matters, for “Format” collects almost every non-album song from the second fifteen years of their lives, and places them in chronological order . Until such time as an exhaustive set of remasters and reissues slip out for their last few records, “Format” is the place to be.

It starts with “The Truck Driver And His Mate”, which is fine, chunky homo-eroticism at its finest, which perhaps, for the better or the worse, delves right into most stereotypical element of the bands catalogue : they are a gay band, and the opening song is about a gay love triangle for truckers. Beyond this, the rest of this are some of the finest songs you've never heard – 12 songs alone from the “Bilingual” record, including the under-rated remix/amped up re-recording of “Discoteca” which takes a mid-paced ballad and becomes a andrenalised stomper.

“Disco potential” and the somewhat lyrically slight “The View From My Balcony” (which is exactly that), are not the greatest Pet Shop Boys ever.

1999's “Nightlife” was, at the time, semmingly shorn of, and out of step with the world.A brash disco album with tinges of regret, the b-sides were oft overlooked : the band were at this stage, touring to half-empty arenas with a bankrupt Harvey Goldsmith taking the proceeds, and whilst their commercial stock was challenged, the record gifted some of the finest songs they ever wrote – whilst “Je T'Aime” with Sam Taylor Wood is missing, we do get the under-appreciated tussle that is the Chris-Lowe led “Lies”. Sticking with the chronological aim of the record, CD1 ends with “Sexy Northerner”, which is amongst the greatest b-sides of all time : unforgettable, daft and funny in equal measure. The key to happy living is not taking yourself too seriously, after all.

The second CD opens with 8 or 9 songs from the 2002-3 period around the “Release” album, where the bands commercial stock was as low as it has ever been, the material was presented with a somewhat realistic, organic approach and – whilst the relative “back to basics” approach of touring with a regular band of guitars, drums, and so forth and minimalist staging had a certain effect, the overall result was one of a drift from the world of big hits. As was expected, a consolidating greatest hits record was issued : the b-sides from period are both good, average, and somewhat unexceptional. You can see why songs such as “Always” - a midpaced, unexceptional, fogettable song – never made the parent album. And, despite being covered by Robbie Williams, the song “We're The Pet Shop Boys” (itself a cover) is perhaps one of the finest, funniest, and most enjoyable hagiographies ever committed to tape. Later, songs such as “The Resurrectionist”, and a retooled with-Elton-John version of 1989's “In private” are welcome additions and proof, were any needed that after twenty years, the band still had and maintained a certain, unique personality. The kind that if it didn't exist, you would miss it, and wonder where such artists wwhere in the world. By the end of the album, and the prolific “Yes” period, the b-sides of the first two singles are present : but many songs – the b-sides to the German “Beautiful people” single, the Christmas EP, “Together” are all absent without leave, and – time restrictions of the format aside – missing.

“Format” is what it is, both a dying breed of the compilation of the now sadly endangered extra track and b-side, and a compendium of extra songs that supplement and expand the previous five studio records with several additional songs each. Some of them are the finest songs the band have recorded : some of them not so. Some of them are songs that you will hold in your ears with a wonder as to where they have been all your life. Others not so. And, unless you bought a digital download from one specific website, others will be songs you probably didn't know existed. Designed for the casual, this weighty, popstuffed package is a value for money delivery mechanism for 38 songs that have, over the past 15 years, been a well-kept secret from pop music's back pages. We're the Pet Shop Boys, indeed.
- posted by Mark @ 9:30 pm