The History of the NME: High Times and Low Lives at the World's Most Famous Music Magazine 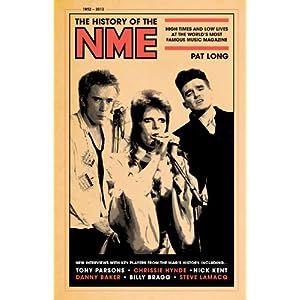 By its very nature, this is an incomplete document : written by Pat Long, who joined the paper in the dying embers of the glory days, this tome - and probably the last of it's kind - takes the story of the NME from its inception as a 4 page sheet sixty years ago to the cusp of the year 2000. It is a fascinating story, and one that captures quite accurately an age that will never return. At the peak of the papers notirety (in my mind, at least) were the glory years of 1992-1996, when Nirvana and Oasis briefly ruled the music universe, and where Blurasis held the front pages of every paper ever published, and the madness, and the directionless attempt to create column inches from trivial and empty gossip were even then making the papers - the NME, arch rival Melody Maker, and the defunct Sounds, fall victim to their own hyperbole. Long picks up the mantle with interviews and discussion from many of the former alumni, offering their perspective through the prism of time and the need to self-justify : the same need all paper have. However, Long makes a stirling effort to shape and form the narrative of sixty years into a cohesive whole. It's not always easy. The role of the paper in the key controversies of the time - the Bowie salute at Victoria, the Morrissey Madstock event of 1992, and many others - are explained with no small fact that the paper needed to sell units and advertising to keep itself alive.

The papers often strange financing arrangements - a loan from a mother-in-law in the early days, for example - and the outlandish expenses, the slack and lacksadasical principles for filing copy - all recall a time of feckless unaccountability. Trips abroad on artist royalties were defined by the location of relatives, or a desire to see the Statue Of Liberty, and dealers who wandered the the floors with a smorgasboard of pharmaceuticals were regular fixtures. These are crazy days, but they make us shine.

With the dimming of the years, memories become fuzzy. Recollections change. The true path of events becomes distorted, and thus, there is always hagiography here. The papers pitch battle for supremacy - and the way it defined every Wednesday and thus, sneaky phone calls on Friday morning to buy tickets for THAT tour, is captured in the space between every line of text.

Where this does fall down, and enormously so, is the finale. As the internet takes a rise, and the paper formats fall to the ground as brittle leaves blown by the storm of technology, then the paper faces its biggest challenge, and also the one that the text utterly fails to acknowledge in any meaningful way. Whilst it is argued in the preface that this is a book in itself, the history of the paper comes to an abrupt end just as it enters the most crucial phase of its existence, when the very word 'paper' carries with it an ancient legacy of the one-dimensional, word-from-God decree and the failure of the title - as so many before it have learnt to their peril - to adapt to the times. This is the NME's great challenge, and one that this title studiously avoids ; instead the paper is left at this book's incomplete conclusion to forage at the future that is the internet and with the tale that is the most recent decade of it's history untold. Incomplete.
- posted by Mark @ 9:12 pm