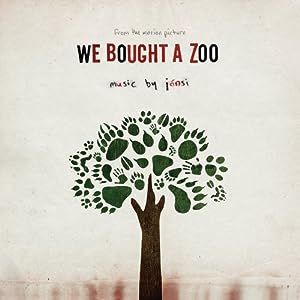 Part soundtrack, part new songs, part a mild retrospective, this - the fourth Jonsi album in three years if you count the behemoth "GoLive" CD/DVD concert - this is a hidden gem in the body of work and so far, often overlooked. A handful of previously known songs "Hoppipolla", "Go Do", "Boy Lillikoi" are represented. On the other hand, the new material is largely stately, timely, epic in vision : on one hand, ideal for nature documentaries about frozen wastes, on the other, an inner monologue wherever you can explore inside your own mind. Without having seen the film, it is difficult to imagine where these mights it in a conventional film, but if music is aimed at evoking emotion, feeling, and complementing an image, then this creates it's own images inside my mind. There's around 36 minutes of new material here (and about 16 minutes of old stuff), utilising a palette rarely seen in film scores, of toy pianos, organic instruments, and a distinct lack of anything resembling a traditional, beat-lead score defined by the stab of horns and the thump of a generic rap/rock track. Shorn of the film, the album works splendidly as a companion to the previous Jonsi / Sigur Ros releases, akin to a structured, more cohesive sequel to "Riceboy Sleeps", or as perhaps a more exploratory branch from the song-based "Go". A record of no small stature, that demands attention and perhaps more than that, a record that you listen to : not just one you hear.
- posted by Mark @ 5:30 pm