THERAPY? - "A Brief Crack Of The Light" 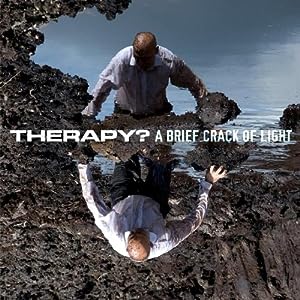 Album fourteen for Therapy? And it's clear that they aren't in this for the money, but in this to the end. The band's trademark sound of buzzsaw guitars, existential lyrics, and thundering claustrophobic drums and bass, are here in abundance, with no shortage of pining, desperate intensity and relentless pressure. A combination of their influences, from Fugazi and Big Black, to Dio and Iron Maiden, Therapy are a band that, from the start, are unafraid to weld melody to agony.

This is a record I could, can, and will live in. Walking the steps of Waterloo East, or the streets of my local supermarket, I often feel trapped in a world of madness, a concentration camp of the terminally selfish and shortsighted : a lyric such as “Living In the Shadow Of The Terrible Thing”, which on one hand is identkit teenage angst, and on the other, captures that sense of doom which hangs over most lives. With this music, I perceive a world different from others, a world where maybe, am I the only one who can view this world for what it really is? Or am I overthinking it?

Is it a crime to think too much or too little?

Third track, “Marlow”, is probably misplaced : it sounds like the kind of aggressive, uncoliled snake that should open a live set as each instrument slowly but surely grips the ear and not settled in third place in a record. As with almost every Therapy song, the music is of tension and release, of rising chords unleashed and of that adrenalin rush as everything hits, and this music is the resistance. Well. It helps me. If anything, it's the battle between the will of mankind, and the the oppression of the world we are forced to live in. When “Why Turbulence” takes hold, it becomes a tale of how someone may, on the face of it, have everything they wish, or be richer than their hopes would ever give them, rich in friends, in career, but is it enough? Or is It the confusion of ones ambitions for whatever they may think they want? Be careful what you wish for. Aside from the unsatisfactory closer - “Ecclesiastes”, this is a strong powerful statement of intent, a refutation of the average, a raging against goining gently into the night.

This compelling, powerful record is a document that, for me, consoles and confirms, and confronts : that if you feel confused by this bizarre world – you are not alone.
- posted by Mark @ 10:47 pm