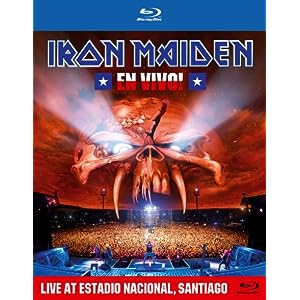 As they begin their slow descent towards retirement, Iron Maiden ramp up the live albums. Way back when, a live album was a rarity, with a decade between "A Real Live Dead One" and "Rock In Rio". With four official live albums in the last decade, three studio records, and six world tours - two of which are nostalgic recreations of the past - it's not that Iron Maiden are slowing down as such, more than they are closing off their history slowly.

Recorded 10 years and 3 months after the near identical "Rock In Rio", "En Vivo!" is Iron Maiden at their best : live, and loud. There's pantomime alright - and grimly predictable. Watch Bruce wave a flag and sing THE TROOPAH! Watch a parade of black denim, shorts, and white trainers last seen in the wild in 1986! Grimace as The Band elude mortality by sounding identical and unchanged since the dawn of time! And as Bruce points to the crowd and gets them to roar in unison in "Fear of The Dark", and let us not forget SCREAM FOR ME SOUTH AMERICAN COUNTRY!

Oh, it's predictable. And comfortable in its repetition. To do this 100 times a year, you must love it. Like a James Bond film, and Coca Cola, you know what you're getting with Iron Maiden. You're also getting one of the tightest, slickest, and most professional bands of all time : a finely honed metal machine. A setlist made of all the songs you'd expect, and the obligatory few new ones. Thankfully, this new stuff, such as "Eldorado", "Coming Home", "The Talisman" is solid, powerful, confident, assured. Unlike so many bands that become dull parodies of themselves, Iron Maiden, for good or bad, haven't made a bad record since 1990. Though there is nothing from 2006's "A Matter of Life And Death" - the only album in recent years the band have performed live in it's entirety - nor are the sadly under-rated Blaze Bayley years : "Futureal" is one of the greatest Maiden songs there is. But then again, Bruce opens his mouth, and the entire of Chile screams "Yeah! Hallowed Be Thy Name!" and does anyone care about the new stuff?

Since half of the set is taken from their 80's heyday, being Janick Gers looks easy as he barely plays, duckwalks, spins around a lot and pretends to punch a man in a monster costume. Janick didn't record or write this material, and his third guitar isn't really needed here. Adrian Smith and Dave Murray have been playing together since 1982, so their telepathic groove, alongside Nicko McBrain's 30 year role as drummer, ensures that Iron Maiden are now in a classic lineup that is undoubtedly one of their strongest periods creatively. "En Vivo" is one night in the life of Iron Maiden, writ large in a South American football stadium, and a fine document that will attest to Maiden's power and deserved reputation as one of the finest live acts of their era.
- posted by Mark @ 9:34 pm