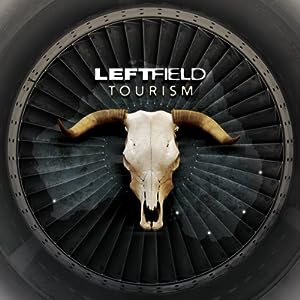 20 years after they began, and Leftfield aren't Leftfield anymore. Originally a duo, now one of them has taken up the name and is playing live again. Not that anyone would notice, or, to be frank care. Given their scant workrate at the time - two studio albums, a handful of remixes - in the first decade, and for the second decade a split, a redundant best of, and now, belatedly, some live shows without much in the way of a reason, Leftfield manage to maintain an air of mystery that is sometimes undeserved.

Recorded in Australia in March 2011, Tourism is that strangest of things. A live album that doesn't feel live, that barely leaves the template of the original recorded versions. Unlike the multitude of live albums by Underworld, or Kraftwerk's sublime "Minimum/Maximum", this is not a restatement or a concentrated burst of the band's essence, but merely a recording of a gig. It fails to capture the feeling of being there, the bonkers sound and smoke and lasers and a field full of people on chemical and musical assistance going all kinds of crazy. On disc, all you get beyond the sound is some guy shouting over a bunch of immaculately performed music. Like a daub of black paint over the Mona Lisa's top lip.

The futurism and menace of the original records has been dulled somewhat by time and childcare : these are now familiar, almost comforting sounds, even when the bass to the enormous "Phat Planet" - tick follows tock, goes the advert - is anything but fluffy, it is also a warm reminder of when perhaps some of us weren't in rented hell with children and six month performance reviews. Where Leftfield always left a hole was that they were always producing proficient and effective music over which they chose often illsuited voices to add listless and unexceptional words. The one time they truly got it right was on "Open Up". Which is not here.

Then again, replacing the original voices with identikit singers and mimics creates a palpable air that reminds me of going out with someone who looks like your best ever girlfriend, but not quite so amazing. It's not quite the same.

But time has not always been kind to them :their discography is so slender that a live set is largely predictable with the same handful of staples - and what staples. Certainly, these songs are dense and luxurious grooves of musical drama. Perhaps the live versions are not improved by hearing a rapper exhort you to "Make Some Noise!"

But what purpose then does "Tourism" serve? It's not clear. Not a memento as such, for live albums can often be moribund and boring, nor a restatement of intent, but a mere record of a gig, ably recreating the sound and spirit of Leftfield. A faithful reproduction of the intent, but with added shouting and baseball caps spread over two CD's.

And don't be fooled. The DVD isn't the typical live concert recording of the full show - instead it syncs the live soundtrack to seven songs with the generic and dull back projections used by the band to enhance their music, and looks largely like repetitive sets of fractals and meaningless visuals. There's not an ounce of actual live footage here. It's a great shame - especially consdering the abundance of live material available of the band from their current tour, and the Brixton show was filmed and parts of it are on YouTube.

Overall, this is a decent value for money presentation at under ten pounds, with a full length, and effective live set (albeit, with the limitations of many live sets and superfluous shouting from guest rappers), and a useful DVD of visuals but it in no way is the definitive Leftfield document.
- posted by Mark @ 12:34 pm