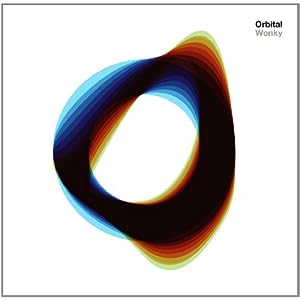 Eight years after their alleged farewell with "The Blue Album" and some rapturously received live shows, Orbital return to record with "Wonky" and - having already been playing live for a few years - have given the world a chance to experience them again.

And this is how its done. Unlike their peers : Leftfield are noticably twelve years since any new material and still touring, The Pixies have been together longer now than they first were with no new material to show for it, and The Stooges managed to scupper their reputation with a muscular record of great songs with disgracefully rubbish lyrics in "The Weirdness". Orbital though? "Wonky" is as good as anything they have done in recent time. Perhaps not quite as overall grand as "Insides", but still the new stuff is as good as any other record. I always had a soft spot for latter period Orbital, particularly "The Middle of Nowhere", and this covers the same ground - the first half, coming in at five distinctly different, but related songs, creates a suite of expansive grooves, textures, and reaching, absorbing and layered, immaculately constructed motifs : each fall over each oither, rise, fall, ebb, flow, creating an everchanging landscape of beats and bounces. "Straight Sun" is ideal material for musical meditation, reminding me of the kind of evocative precise timing that Pink Floyd particularly excelled at. As one movement ends, the silence is replaced by a timely and appropriate following number, so it all flows in an immaculate, impressive sequence of experiments.

"Never" is not the sound of a bored band in their creative death-throes tinkering at the edges, like some kind of moribund middle aged couple suddenly turning to swinging. This is the sound of an invigorated duo in love with the endless possibilities of banks of technology. I press down a special key and it plays a little melody!

I was, truth be told, ready to write off Orbital without new material. The endless musical museum of touring acts that hide from anything new, being simply their own best tribute acts, without a new song since 1983, bore me rigid after the first tour. Then again, "New France" sounds caved out of the same rock as anything they have done after the date Kurt Cobain killed himself. Certainly, there's not a huge amount of progression since 1994, nor have the sounds changed particularly. But does one contemporize a classic? Does anyone criticize AC/DC for not having a guest rap by Kayne West?

On second thoughts, remembering Metallica's ill-advised rap with Swizz Beatz, or Jimmy Page and Puff Daddy, and not all progress is forward leaning : not that there is any change of the formula here - as good as Orbital ever were. It is only the closing notes of "Distractions" and the tired "Stringy Acid" that bore, because it is the same kind of uninspired, and forgettable near-the-end-of-the-album stuff that Orbital have been occasionally putting out since they formed. And for all the hype, "Beezeldub" is a reworking of "Satan" with all the good bits taken out being basically a experimental dub b-side remix of the type that New Order tossed off in half-an-hour to pad out a 12" : it's not bad, but it isn't their best thing ever.

The title track is fine as well, albeit living on the shadow of phased drum beats that are a Eighties throwback. The rap by the lamentable Lady Leshurr is though, tragically inarticulate, largely consisisting of the words "Dancefloor!" and "Wow! Wow! Wow!". How impossibly dull and boring, with tediously stupid words, and utterly unimaginative vocal melodies. The track would be a much better instrumental.

And here's the rub : with this music, the words have to matter : the music itself is so strong, and well constructed, any lyrical input has to have a reason to exist, otherwise it's vandalism of sound. Were this a home made cassette recording, the title track would be relegated, and deservedly so, to "rubbish b-side" status. Thankfully, order is restored with the final "Where Is It Going?", which picks up the mantle of rising sounds and aspirational, positive string sweeps. Built on buzzing bass strings and a set of delicate interwoven arpeggios, its the type of stuff I'd happily listen to all day long in the summer. The album peters out into the ether on these chords, disappating elegantly, with an assured, confident flex of musical muscle. Orbital. I have missed you.
- posted by Mark @ 12:03 am